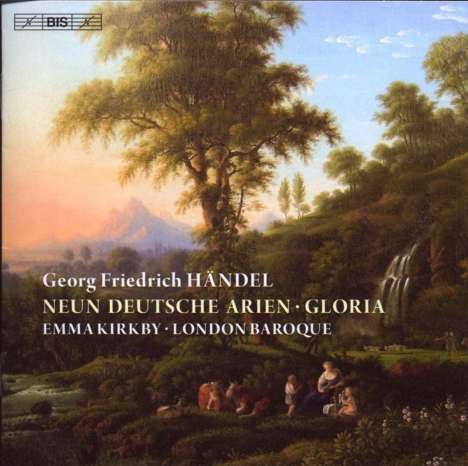 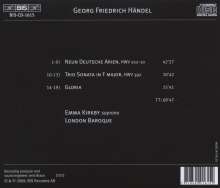 Nur noch 1 Stück am Lager. Danach versandfertig innerhalb 1-2 Wochen (soweit verfügbar beim Lieferanten)
EUR 19,99*
Versandkosten
Among Handel's vocal works - from the early, operatic solo cantatas to the full-blown operas and the oratorios of his London years - the Nine German Arias hold a special place. Possibly composed around the time that the composer made a final journey to Germany to take leave of his ailing mother, they were Handel's last settings of texts in his native language. It seems likely that these circumstances contributed to the intimate character of these highly personal works, in combination with the texts themselves. Barthold Heinrich Brockes' poems point ahead towards the Enlightenment, establishing as their setting a harmonically organised world, in which benevolent Nature is the prime example of God's bounty. Emma Kirkby has chosen to combine these arias with the much earlier Gloria, discovered in 2001 and given its première recording - by Emma Kirkby herself - in the same year. As a result of the smaller forces (two violins, cello and chamber organ) employed on this re-recording of the exuberant work, the performance has a more intimate atmosphere, giving an interesting perspective on a piece which although written 300 years ago, is still a new addition to the repertoire. Emma Kirkby and London Baroque share a musical relationship of long standing, and appear together on two previous Handel recordings on BIS. The recent 'Handel in Italy', a programme of early, secular solo cantatas, was highly praised by the reviewers, for instance in the German magazine Fono Forum: 'Emma Kirkby presents these pieces with a deep insight into human thought and feeling. her interaction with London Baroque is an impressive demonstration of how a common musical understanding has matured and strengthened throughout a collaboration of many years.' An earlier disc of 'Sacred Cantatas' also received a number of distinctions, including a 'BBC Music Choice' in BBC Music Magazine, whose reviewer had 'seldom been as moved by a recording, both music and performance.'