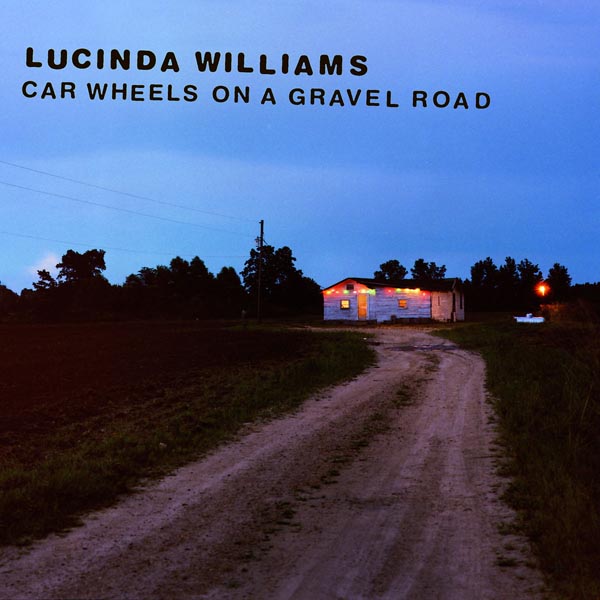 With a new Lucinda Williams album expected this fall, her most rapturously acclaimed and best-selling album to date receives the expanded Deluxe Edition treatment. The two-CD Car Wheels On A Gravel Road – Deluxe Edition (Mercury / Lost Highway / UMe), released October 24, 2006, adds a pair of previously unreleased studio tracks plus an alternate version of “Still I Long For Your Kiss” heard in The Horse Whisperer and an entire previously unreleased 1998 live performance to a newly remastered edition of the singer-songwriter’s most celebrated and beloved album.

Six years since her previous album, 1998’s long-anticipated Car Wheels On A Gravel Road was worth the wait. The 13-song collection’s passionate, sharply detailed accounts of love, loss and longing were matched by the deceptively laid-back intensity of Williams’ performances and those of guest artists that included Steve Earle, Emmylou Harris, Charlie Sexton, Jim Lauderdale, Buddy Miller and the E Street Band’s Roy Bittan. Topping many year-end critics polls and landing Williams her first gold record, the album also won the Grammy for Best Contemporary Folk Album, despite being her least folkish work. A masterwork of roots rock woven through with folk, honky-tonk country and blues, the album (her fifth) marked her artistic and commercial breakthrough after a near 20-year recording career.

Augmenting the original album on Disc One are two outtakes from the album’s initial 1995 Austin sessions - the Williams original “Out Of Touch” (which she would re-record for 2001’s Essence) and a stripped-down reading of the 1920s blues classic “Down The Big Road Blues”- and the alternate “Still I Long For Your Kiss.”

Disc Two captures a spirited live performance, recorded July 11, 1998 at Penn’s Landing in Philadelphia for WXPN’s “Live At The World Café” radio show. Featuring Williams’ then-current touring band, the set encompasses nine numbers from Car Wheels On A Gravel Road (the title track, “Metal Firecracker,” “Right In Time,” “Drunken Angel,” “Greenville” “Still I Long For Your Kiss,” “2 Kool 2 Be 4-Gotten,” “Can’t Let Go” and “Changed The Locks”) and four earlier favorites (“Pineola,” “Something About What Happens When We Talk,” “Joy” and “Hot Blood”). The concert as well as the Disc One bonus tracks have also been newly digitally remastered.

What was said of Car Wheels On A Gravel Road in 1998 is still true today: “In a world inundated with cookie-cutter, Lilith-ready wimps,” wrote Entertainment Weekly, “there’s enough gravel on Williams’ wheels to fill a West Texas dump truck.”

Lucinda Williams
Down Where The Spirit Meets The Bone
3 LPs
EUR 34,99*