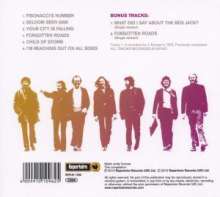 This album features newly discovered ‘live’ recordings from 1972 by one of the finest British jazz-rock groups of the 1970s. If starred tenor sax men Dick Morrissey and Dave Quincy with lead guitarist Terry Smith, and they all play at their best on these sparkling in-concert performances. Although the British band released a succession of excellent studio albums, there is no doubt that these ‘live’ recordings from Europe have the edge. You can hear the audience shouting encouragement and the horn solos are delivered with extra punch as the tunes take on new life. Strong vocalist ‘J. W’ Hodkinson interprets the lyrics with great spirit and shows why If were so popular among rock as well as jazz fans. Former If founder Dave Quincy talks about the origins of the group and the tracks on this recording in a new interview for the CD liner notes.