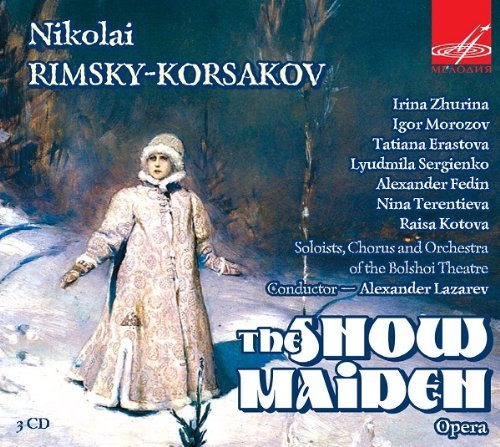 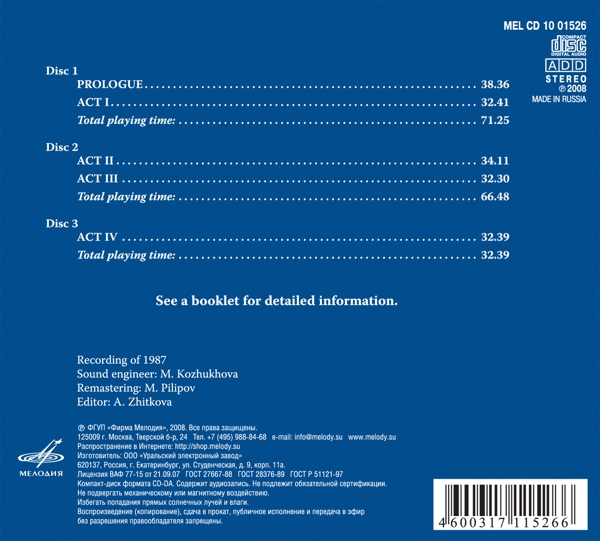 In the first years of married life with Nadezhda Purgold when bright romantic perception of the world and very special peace of mind were established in Rimsky-Korsakov’s heart, two charming operas were added to his store of works. Both were called “Spring operas”: the matter concerns “May Night” based on Gogol’s story and “Snow Maiden”. Choosing the image of spring change the composer wanted to describe not only awakening of nature but reviving of the human soul that was frozen, the return of warm feelings. Rimsky-Korsakov started to compose “Snow Maiden” in 1880 being on holiday with his family in the estate Stelevo. “A wonderful orchard with plenty of cherry and apple trees, with strawberries, gooseberries, black currants, lilac in blossom, plenty of field flowers and unceasing birds’ singing”, recollected Rimsky-Korsakov in his “Chronicles of my life in music”. “Everything was in harmony with my pantheistical mood and my being in love with the subject of “Snow Maiden”. I composed every day and the whole day,…musical ideas and their arrangement haunted me persistently”. Easiness and quickness of composing the opera were the evidence of not only Rimsky-Korsakov’s keenness on Ostrovsky’s fairy tale subject but of his maturity as composer. The opera was completed in clavier within two months and a half! For the composer himself it was a definite degree of his progress. “Completing the work on “Snow Maiden” I became aware of myself as a mature musician and opera composer, who has finally got on his feet” (from “Chronicles”).

Rimsky-Korsakov confessed that while he had been writing music to this opera he “had listened to folklore and nature and borrowed all that was sang and prompted as the basis of creative work”. It is really so because in the music of “Snow Maiden” we come across many themes that were borrowed from folklore. Most of them were performed by the choir, for example, the song “It is fun to meet and greet you” from the scene of farewell to Maslenitsa, a round dance song “Hey, there is a little linden in the field” or the Chorus from Act IV “We were sowing millet”. These very songs that were composed in unusually ringing cadenzas and phrasing help him to recreate the spirit of the ancient kingdom of the Berendeyans. The sensitive composer could catch the main idea – Snow Maiden was not cold and heartless, without any feeling of love but she was longing to love, to be near the people, feel and experience as most of them. The author of the fairy tale A. N. Ostrovsky admired the opera. In his letter to Moscow music critic S. N. Kruglikov he fully expressed his admiration, “Korsakov’s music to my “Snow Maiden” is astonishing. I could hardly imagine anything that might be more suitable and could express so lively the poetry of the ancient pagan cult and this cold as snow at first and then irrepressibly passionate heroine of the tale”.

Rimsky-Korsakov endowed Snow Maiden with a number of leitmotifs in contrast to all the rest characters of the opera. They sound in her vocal part, in the orchestra phrasing showing the change of her mood. This motif rings especially touching when it accompanies the scene of Snow Maiden’s melting – it evokes the feeling of immense pity expressed in the words of B. Asafiev: “There is no any solemn ritual or any conviction that everything goes as it must go or it takes its normal course, that can’t convince us of the Sun’s unprejudiced retribution…We are sorry for Snow Maiden, sorry for the past spring with its gentle dawns, quiet evening twilight and modest white lilies of the valley”.

Both musicians who performed “Snow Maiden” and audience fell in love with the opera at once; it won the composer’s heart as well. Many years later he sincerely wrote to Stasov that he had composed his Ninth Symphony long ago – it was opera “Snow Maiden”. (melody. su)