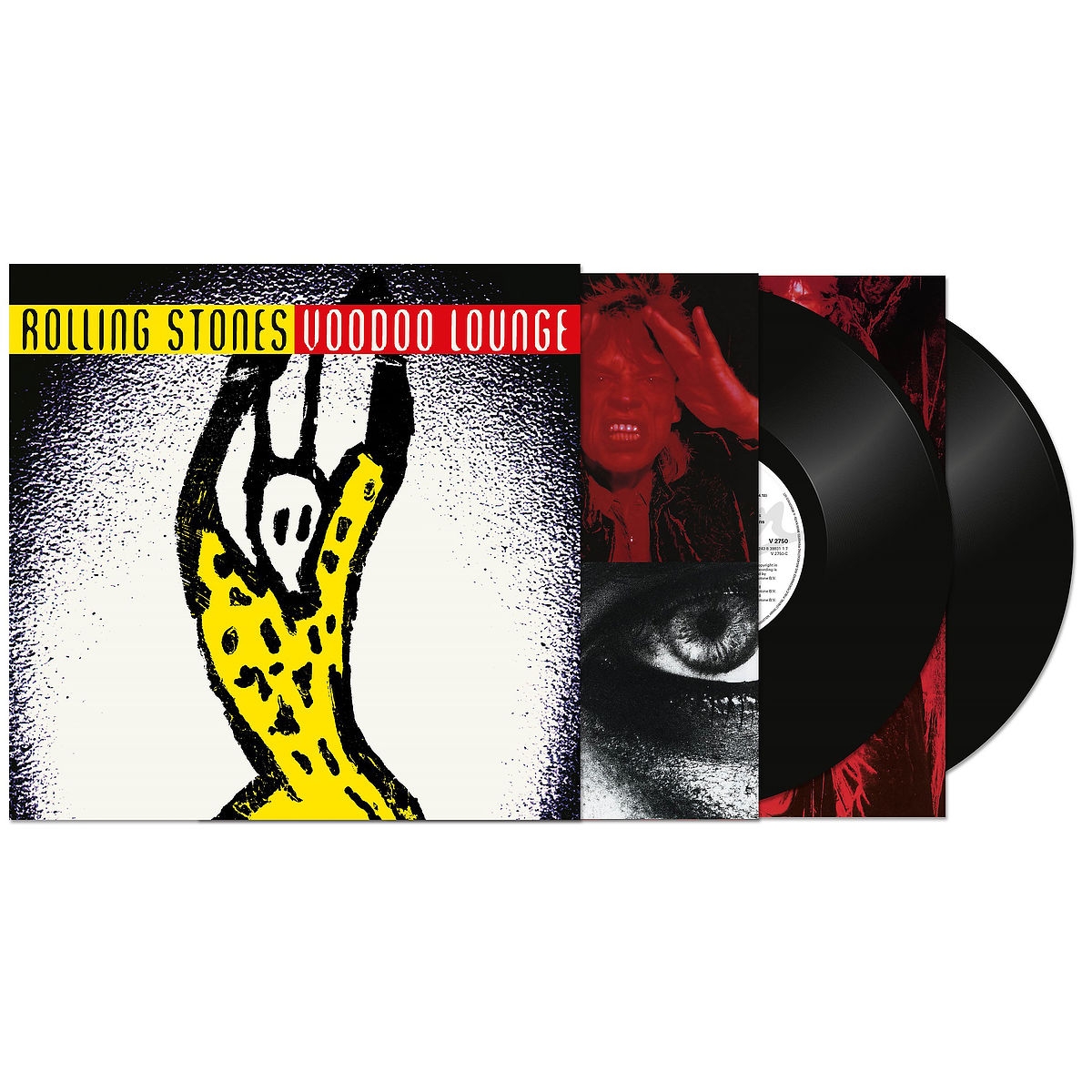 *** Gatefold Cover
The first Rolling Stones album without Bill Wyman on bass, and with Don Was producing could have disappointed. Instead, it won the Grammy for Best Rock Album.

Voodoo Lounge came at an awkward moment for The Rolling Stones. The 1980s had seen the band lose some cohesion and direction, in the opinion of many of their fans; and doubts were beginning to be expressed about the viability of the band.

Personal side projects had appeared to take precedence over the work of any, or most of the band members. Rumours abounded about Mick and Keith's working relationship.

The undoubted commercial triumph of 1989's Steel Wheels, both the tour and the album (including European leg, Urban Jungle), had provided a convincing rebuttal to these rumours.

Then, in 1992, Bill Wyman announced his retirement from the band, and the question of whether The Rolling Stones could continue without him was inevitably raised once again.

Voodoo Lounge was The Rolling Stones' answer to that question: an emphatic 'Yes, for as long as we want to'.

The fact is that although Bill's departure did mean the end of a 30-year-era, Voodoo Lounge represented a new start, for a new band with a new producer. True, the four band members had been playing together for twenty years - three of them for over thirty - but the loss of the bass player could have spelled disaster and a new producer, especially for a successful group with known habits and references, is always a risk.

The situation was seized by The Rolling Stones as an opportunity, and the results are audibly inspired, authentic and widely admired. (The traditional wisdom, then and now, is that Voodoo Lounge is the best Stones record since Some Girls - itself 'the last great Stones album' since...well, the one before that ;-)

The album was massively popular by any standards, going double platinum in the US and spawning several UK hit singles, although US single success proved elusive. (The thirteen month, six continent tour to promote the album grossed $320,000,000, the band's second most successful tour ever, behind A Bigger Bang.)

The straight-rockin' opener on Voodoo Lounge, Love Is Strong, gets plenty of plaudits for coming in like the band mean to go on, harking back to 'the golden age'. And it's true, that this sounds exactly like The Rolling Stones used to sound on, for example, It's Only Rock 'n' Roll, after they'd perfected their modern rock sound.

And bang on cue, You Got Me Rockin' doesn't pretend to be anything other than it is either - the clue's in the title, the music's in the message, and this is also unmistakably the sound of the Stones, Bill or no Bill.

When Mick shrieks "I was a hooker losing my looks", in addition to grinning at the inherent and intended dash of comic effect, you just know you're with the band who brought you Torn and Frayed, for example.

Growing up involves getting older, even if it doesn't mean slowing down. The similarly upbeat, three-minute, "I want sex"-symphony Sparks Will Fly - notwithstanding the wholly unexpected and atypical lapse in the into outright lewd obscenity by an obviously revved-up Mick Jagger - is another favourite.

(To be fair to the greater community of Stones fans, discussion of this one does get a bit 'Marmite' on the message boards - those who can't hear the ludicrous humour of this straightforwardly randy rock 'n' roll rant tend to come down hard on it for being crass.

Crossing the borders and boundaries of public decency? Yes, it's a risk The Rolling Stones have always been prepared to run. As Mick said of Beggars Banquet 25 years earlier, "Some people find some of the lyrics rude. Some of the lyrics ARE rude, actually."

In slower mode, heartbreak confessional The Worst and the harpsichord ballad, New Faces, are less controversially admired. A sweet, sad, plaintive lament to the sorrows of past youth and love lost, a resemblance (and possibly favour owed) to Ruby Tuesday has been suggested.

Moon Is Up steps the pace up a notch but stays reflective of lyric. However, surprisingly exotic instrumentation - some wicked pedal steel from Ronnie, Mick on castanets and harp, Heartbreakers keyboardist Benmont Tench on accordion and Charlie playing drums on a trash can in the stairwell- makes this sweet, simple, straightforward tune an unexpected highlight.

Out Of Tears harks back to the great ballads of the golden age. Very much Mick's song, it's a classic sad ballad, perfectly suited to his voice, Chuck Leavell's piano and the triple guitars of Keith (electric), Mick (acoustic) and Ronnie (electric slide).

The topical, wholly emotional Blinded By Rainbows and also Mick's song stands out on Voodoo Lounge for various reasons. With words full of torn flesh and Semtex explosions, it's unique on an album that is otherwise, by Mick's admission, 'all about girls, cars and immaturity'. A slow-moving country rock tune for the nineties, Blinded By Rainbows sits comfortably enough on Voodoo Lounge in musical terms, but more like 'a tarantula on angel food', in Chandler's phrase, when it comes to its lyrical content.

Voodoo Lounge is long and consistent album, which can make it sound 'samey' - in the same way that any collection of music assembled for similarities as well as contrasts can sound unvarying at first listen. But songs like Suck On The Jugular - now that's what you call a groove - which is a song best summarised by its chorus line "Let's get together and rock all night/Let's get together and fuck all night"; and revenge tune Mean Disposition start standing out once you've recognised them.

Voodoo Lounge is never going to be as accessible as the Stones albums that made it possible in the late '60s and early '70s, because it's a direct descendant of them - like trying to be your own grandfather - not just like him, but to be him. But in terms of that style of black and white blues that the Stones helped to invent, Voodoo Lounge has claims to classic status. (rollingstones.com)