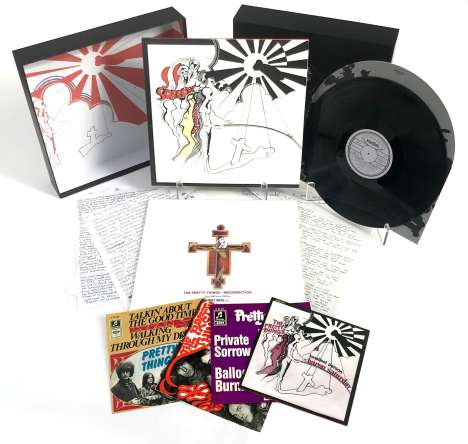 The Pretty Things, iconic 1st wave R&B cult heroes, created some of the most exciting and innovative records of the sixties and early seventies. Winners of the Hero award at the 2009 Mojo Honours, the band have been a massive success and a huge influence on artists as diverse as David Bowie, Aerosmith, The Ramones, Bob Dylan, The Sex Pistols, The White Stripes, Kasabian and many, many more.

This year, The Pretty Things celebrate their 55th anniversary as a band with their final live tour and final studio album, as well as 50 years of the world’s first rock opera, S. F. Sorrow, which is hailed as one of the great classics of the Psychedelic era. The album stands favourable comparison with Sgt Pepper and Piper At The Gates Of Dawn as one of the defining records of the time. Originally recorded at Abbey Road in 1967 and 1968 it was one of the first true concept albums, pre-dating Tommy by a full year.

The release of this 50th anniversary box set will coincide with the band’s final and extensive UK & European tour, which includes a performance of S. F. Sorrow in full at the Isle of Wight Festival and ends at a farewell show in London at Indigo at the O2 with an impressive supporting line-up of David Gilmour, Van Morrison and Bill Nighy.