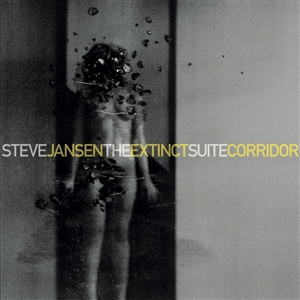 "The Extinct Suite" - The third solo album release from Steve Jansen. A reinterpretation of the more ambient and orchestral elements of 'Tender Extinction' (Jansen's second solo album). Not a remix by any means, some familiar passages are woven together with additional pieces to create a suite of instrumentals lasting over 55 minutes as one single track split over Sides A & B of this 2LP album.

"Corridor" - A slowly evolving instrumental piece designed for playback in a gallery space with uncontrolled acoustics and no sound insulation. Avoiding percussive and complicated bass content this audio is designed to float in a live space at low level volume allowing sonic variations to subtly stimulate the ambience. Original installation at the Cape Breton University Art Gallery, Canada to accompany a photo exhibition titled 'Through A Quiet Window' by Steve Jansen May 11 to July 6, 2018. Split over Sides C & D of this 2LP album.