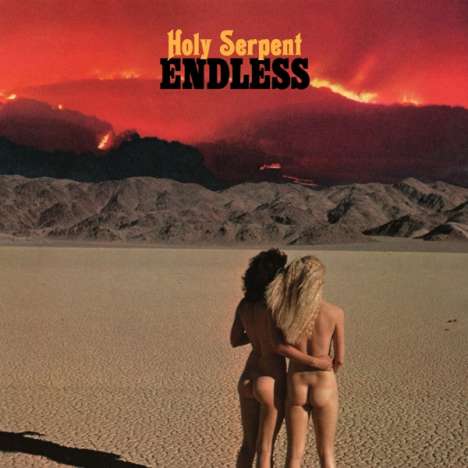 The forthcoming third album by Melbourne, Australia's Holy Serpent could likely be its defining moment. Seemingly bottomless in its relentless heft, with billowing and suffocating riffs leading glistening melodies, it's the sound of a band that has locked on to something unique.

Endless is fully conceptualized throughout, encapsulating an oceanic theme from the lyrics and art, even to the very structure of the sounds themselves. »Lyrically, it's heavily influenced by the ocean«, explains vocalist/guitarist Scott Penberthy. »Lots of ocean metaphors and imagery was used. Also the title of the album Endless, is an homage to the ocean: Its mystery, power and its ability to give and take life.«

The album loosely follows the lyrical theme of two lovers, oceans apart, waiting for each other on the shores of eternity. Their love is so strong, they eventually walk into the water, ending their lives to be together in the afterlife. Fitting to these themes, the band experiments with sound throughout the album, such as layering in a wobbly synth sound reminiscent of tape push and pull, mixed just loud enough to blend with the instruments. »It's sort of a haunting sound which gives the album an ebb and flow, much like an ocean's current or tide«, Penberthy says. The 6-song, 40-minute album finds Penberthy, guitarist Nick Donoughue, bassist Dave Bartlett and drummer Lance Leembruggen expanding their melodic hooks while simultaneously taking listeners on a rigorous journey. It was written over the course of 2 months, then recorded in seclusion at Beveridge Road Recording Studios near Australia's beautiful Dandenong Ranges with head engineer Marc Russo and mixed by Mike Deslandes.

Surrounding themselves with nature and no distractions allowed the band to focus on every detail of the album as a coherent whole. In the time since their self-titled RidingEasy debut in mid-2015, Melbourne, Australia's Holy Serpent have gained a lot of attention for their rather punk version of heavy psych and metal. Their 2016 skate-metal leaning album Temples further defined their more experimental blend of early Soundgarden, Saint Vitus and Kyuss that eschews simplistic 70s-worship in favor of shimmering sonics and uncommon production techniques.

Nonetheless, Endless is like all of the band's earliest visions fully realized and honed into an album beyond easy classification. Starting with the slow, exaggeratedly compressed 4/4 drum lead in to »Lord Deceptor« - something of a hi-dive anticipation before we plunge headlong into the ensuing depths - crushing and crackling guitars burst in as Penberthy sings in low baritone, »ocean grave, carry me upon a wave / I'm hypnotized in prophecy, what Is left for you and me?« Harmonies drift in and out of the main motif as it sways along into the tempest of »Into The Fire.« Here, a churning riff gathers intensity as the rhythm section builds to a lurching 3/4 time. Reverb-soaked vocals sing, »where the ocean meets the sand, I'll be waiting, I'll be waiting there.«

Elsewhere, on »For No One,« impossibly low droptuned guitars slink along as the music swells with space rock abandon. Album closer, »Marijuana Trench« is a play on the Mariana trench, the deepest place on earth. Appropriately, the song plunges from gently strummed acoustic guitar into a tsunami crest that pulls the listener under the dark and enveloping weight of sound as Penberthy's soothing vocals seem to ease us into the end, subsumed in the album's powerful allure.