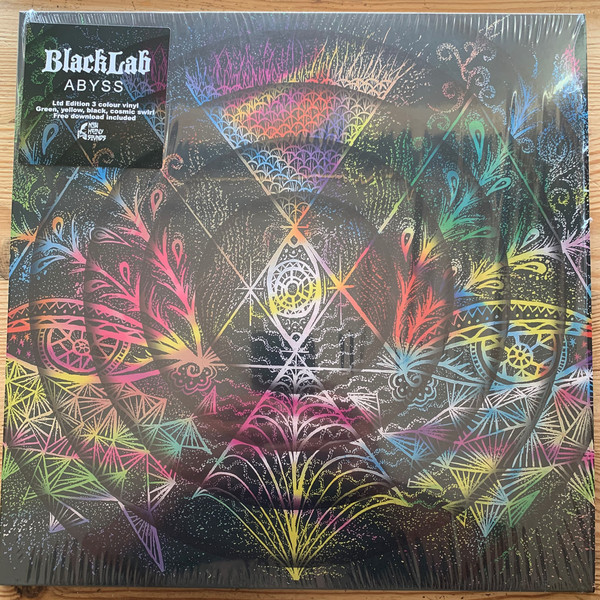 BlackLab ›the dark witch doom duo from Osaka, Japan‹ are poised to return with their new long playing record »Abyss«.
The first album was a remixed collection of the band's early tracks, a melting pot of influences as they set out to inhabit their own space. Now with »Abyss« the band are very much defining what that space is. Once again, the album was produced by Jun Morino in Osaka, and mixed in London by Wayne Adams (Pet Brick, Green Lung, Cold In Berlin) and is an uncompromising beast of a record.

Recorded under a full moon over 3 intense days, the album has the ›off the leash‹ abandon of ›Fun House‹ era ›Stooges‹ and is marked by a fat dose of doom meets slowed down hardcore punk; filled with loud, ultra distorted guitar, and yet, a surprising amount of melody as well. In fact, Yuko has said that the band's name is a combination of Black Sabbath and Stereolab, well here on »Abyss« is where that strange mix begins to make musical sense. The band haven't lost their love of lo-fi or ›Riot Grrrl‹ attitude. The guitars are loud and heavily gnarled to the point of chaos. Vocals go from shoegaze melodic to hardcore screams (in fact rarely has a vocalist in this genre screamed so musically as Yuko does) and underneath all this, Chia batters the skins, all rolling and tumbling thunder amidst the riffs. Yes there is a smattering of »Sabbathy Wizarding« of course, but submerged within dark, deep fuzz and punk rock crank and grind. In truth the vibe is closer to both the arty heaviness of early Boris, and the sweet savagery of My Bloody Valentine, than any kind of ›doom‹ tropes. It's a sound that is undoubtedly BlackLab's own.

So over 8 tracks, clocking in at around 42 mins, you get the current Blacklab world view. ›Insanity‹ creeps in with a sound familiar to doom lovers. Then over the course of eight minutes manages to motor into its own riff time continuum, fuelled by heavy fuzz, pounding drums, and vocals that run the gamut from surly, to sweet, to full on throat- shred. ›Fade and Melt‹ is quirky, odd even, but heavy too, marrying a sweet Japanese melody to a dense, rolling barrage of distortion. ›Weed Dream‹ is driven by chugging, barely under control guitar and grunge punk swagger, and it's here that Yuko most obviously channels her inner Stereolab. ›Amusement Park Of Terror‹. The title sounds like some cheapo 60's bug movie, or a grade B slasher flick from the 80's. Well to be honest this short instrumental interlude would be the perfect soundtrack to either. Both ›Forked Road‹ and ›Chained‹ are cut from the same cloth, a mash up of ›Stooges‹ meets ›Comets On Fire‹ mayhem and loping Sleep - esque riffs. ›Sleepless Night‹ is all throbbing distortion and understated threat, albeit with a curiously catchy chorus and coda. Then you have ›Sun‹ an underscore to any number of nihilistic apocalypses. It crashes in with a guitar tone so huge it'll threaten to demolish your speakers. Abyss is an album that is as raw and alive as it gets. It's refreshingly free of artifice, and it doesn't arse around. Say hello to the Osaka underground.

»BlackLab's relentlessly bleak, feedback-drenched and fuzz-laden take on doom / noise is as dark and mysterious as a black hole, and every bit as absorbing.« (CLASSIC ROCK)

»Blacklab are awesome. Fall under their hex immediately.« (KERRANG)