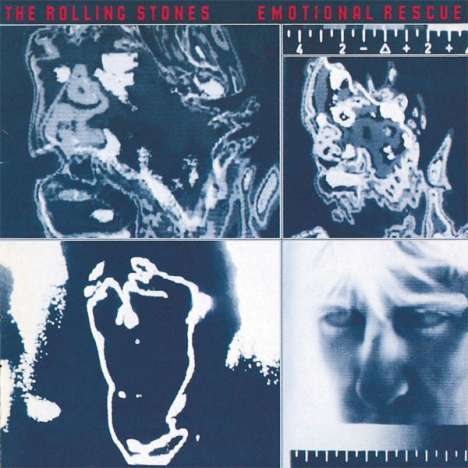 1980 was a time of change. Expectations of The Rolling Stones' 15th studio album were mixed. The band had mastered the 60s, ruled supreme in the early '70s, and adapted to punk and disco. Could the sole rock 'n' roll survivors change again to succeed in a third decade?

Emotional Rescue attempted to pull off the same trick that The Stones' previous studio record, 1978's Some Girls did; but it wasn’t quite as easily done two years on.

Having said that, many of the actual songs on Emotional Rescue still sound remarkably good. Dance (Part 1) [Part 2 appeared, briefly, on the Sucking In The Seventies compilation] piles the brass stabs, the DJ-friendly breakdowns and the lolloping bass-lines on top of Jagger’s insistence we should all, “Get Up! Get up! Get out!” It’s music for the party in the gold-leaf strewn ante-chamber behind the VVVIP room at one of those smart new Ibizan nightclubs.

By complete contrast, Where The Boys Go is actually hilarious, a cockney rebellion, a mussed-up, cock-strutting, punky-rocky party piece that inhabits that unusual ground between David Bowie and Sham 68.

“All day Monday and all day Tuesday I played football,” Jagger sings, “there’s nothing on the telly…”

If that doesn’t convince you that this record isn’t worrying the frayed hem of genius, then just wait ‘til the female chorus cuts in.

The aforementioned Summer Romance is equally silly and wonderful, a hair-shaking, hip-swinging anthem to hanging out that owes more than a little to AC/DC.

This is one of those times when you need to let it wash all over you and not try to second-guess what’s going on upstairs.

Meanwhile, Down In The Hole is an often over-looked classic and uncontroversially one of the album’s outstanding tracks. A proper blues jam laid down by proper bluesmen making the most of shiny 1980 production standards, Down In The Hole is a truly bleak and affecting piece that links the old and the new and is as relevant and absorbing today, in the age of the Exile re-release, as it was when first released in the first flush of the Post-Punk era.

The timeless quality of Down In The Hole stands in sharp contrast to Send It To Me, a misjudged pop reggae number that, in all honesty, has not borne the passing of time entirely kindly. Filler, for sure; but worth a listen as a period piece, and a reminder that for all the marvellous musical highways The Rolling Stones have rolled down in style, there have been some fruitless diversions on to suburban ring roads too. Nobody makes it this far without having made a few mistakes along the way.

Much better is Let Me Go, a deceptively simple Buddy Holly-style rocker, which jangles and rumbles along with fantastic arm-around-the-shoulders harmonies and the unforgettable line, “Maybe I could become a playboy, hang around in gay bars, move to the west side of town…”

The title track is a crisply cut slice of spectral disco, held together by a disciplined and quietly impressive rhythm section, and in which Jagger goes for the full Curtis Mayfield falsetto, pitching it high and sleazy over a stripped bare funk backing track. Frankly, it sounds a little like Barry Gibb did in 1978 and Prince would do in 1984; although neither of those two ever casually dropped into such richly lascivious comedy voiceover mode in the fade-out in quite the way Jagger does here, at 4.35, ‘riding across the desert on a fine Arab charger’. Awesome.

Strangely, one Rolling Stones website voted Indian Girl as among their worst ever tracks, but, musically, this is actually sort of beautiful. Lyrically, the tale of violence and insurrection in South America is a little less easy to deal with:

“There's nothing left in the larder,” Jagger sings, “Last piece of meat was eaten by the soldiers that raped her”; but the fact remains this is a great ballad that rides an open-faced, steady-rolling groove with the assurance that comes with almost twenty years of experience.

She’s So Cold is also touched by whatever magic it is that makes The Rolling Stones and Jagger/Richards different to and generally better than everyone else as songwriters and musicians. A classic, off-the-cuff pop song, pure and simple, in which Mick’s expressive vocal deals with a favourite theme – sexual frustration and the drawbacks of chicks not ‘putting out’ – while Keith and Woody, especially from 1.55 onwards, weave in the expert laconic country blues licks that make all the difference.

Keith’s All About You is a little beauty too, with a flash of Bowie’s Lady Grinning Soul about it – a late-night light-up of a song.
“I’m so sick and tired of hanging around with dogs like you,” Keith sings, “you’re the first to get laid, always the last bitch to get paid…”
Of course, he finishes by saying that, despite all that, he’s still in love.

And so, emotion duly rescued, the song and album end: a powerful but accessible and remarkably light-hearted statement of intent as well as achievement from a band who, in 1980, were assuming elder statesman status; but who still had at least two thirds of their career and maybe more still ahead of them. Give this a listen and you understand why. (rollingstones.com)