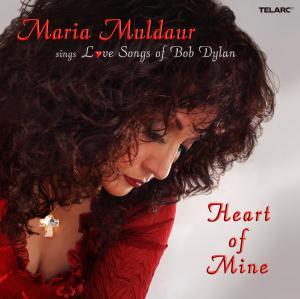 Vocalist Maria Muldaur is a child of American folk and roots music. Raised in the fertile Greenwich Village scene of the 1960s, she earned her musical stripes alongside some of the most revered folksingers of the period. Among her contemporaries was one Bob Dylan, the balladeer who single-handedly redefined the pop music landscape with a brand of insightful music that transcended its folk roots and left an indelible mark that is evident to this day. In the early days of the Village folk scene, Muldaur and Dylan often played side-by-side in the coffeehouse circuit.

Muldaur remembers well the “deep, fervent, compassionate and amazingly perceptive” voice that Dylan brought to the many social issues of the early and mid-‘60s during his Village heyday. But she insists that there was—and continues to be—more to Dylan’s music than commentary, protest and change. “It occurred to me,” she says, “that while Dylan is mostly known for his scathing, perceptive, brutally honest and insightful songs of social consciousness, he has in fact, over the years, written many passionate, poignant love songs.”

Muldaur showcases this lesser known side of the Dylan legacy on her new Telarc release, Heart of Mine: Love Songs of Bob Dylan.

“I saw Maria in the great Martin Scorsese documentary about Bob Dylan, No Direction Home,” says Elaine Martone, production supervisor for the project. “She talked about the early days, and there was even some footage of her performing in the Village in the early ‘60s with Bob Dylan. I was struck by the fact that she’d had a direct association with him during his formative years, which I knew because she and I had spoken about it when we were working on Maria’s Fanning the Flames album, her first for Telarc. When Bob [Woods, executive producer] approached her about doing a recording of Dylan songs, she narrowed the focus and suggested one of Dylan’s love songs. We thought that was an even better idea, and the result was a stirring, sensual album.”

Opening with the laid back and sensual “Buckets of Rain,” Muldaur immediately segues into “Lay Baby Lay,” a slight variation on Dylan’s well known “Lay Lady Lay.” Her deft reading of what is arguably Dylan’s most popular love ballad is arranged with a subtle but unmistakable reggae groove that further heightens the trademark earthiness of the original song.

The title track is a cautionary tale of sorts—an open letter to the self about putting the brakes on when love threatens to cloud one’s better judgment. David Torkanowsky’s Hammond organ accents in the distant background on this track is reminiscent of Al Kooper’s trademark organ riffs on Dylan’s landmark 1965 opus, Highway 61 Revisited.

Further in, “Moonlight” is packaged in a sort of lazy swing groove, and loaded with sensual imagery and the sly wordplay that justify Dylan’s longstanding reputation as a lyrical genius. Torkanowsky’s brief piano solo in the final bars weaves in a few subtle quotes from the melody of the jazz classic “Ain’t Misbehavin’.”

“Wedding Song,” a love song set in an unlikely minor key, is a dark and mysterious profession of devotion that is so boundless it defies comprehension. But the tone changes abruptly and the set ends on an upbeat, uptempo note with the rousing “You Ain’t Goin’ Nowhere.” At the urging of Dylan himself, Muldaur takes up the fiddle and adds some spicy lins to this celebratory, cajun-flavored closer.

Like love itself, Heart of Mine encompasses a wide range of emotions: joy, sorrow, yearning, contentment and a host of other feelings that defy description. “The songs I found were in turn poignant, passionate, seductive, playful, mystical, often bittersweet, but always heartfelt,” says Muldaur. “It was a great pleasure, and at times, quite a challenge for me to wrap myself around these soulful songs and make them my own…Some written long ago, some quite recently, these love songs convey great emotional honesty and depth, and are timeless—as is true love itself.” (concordmusicgroup. com)