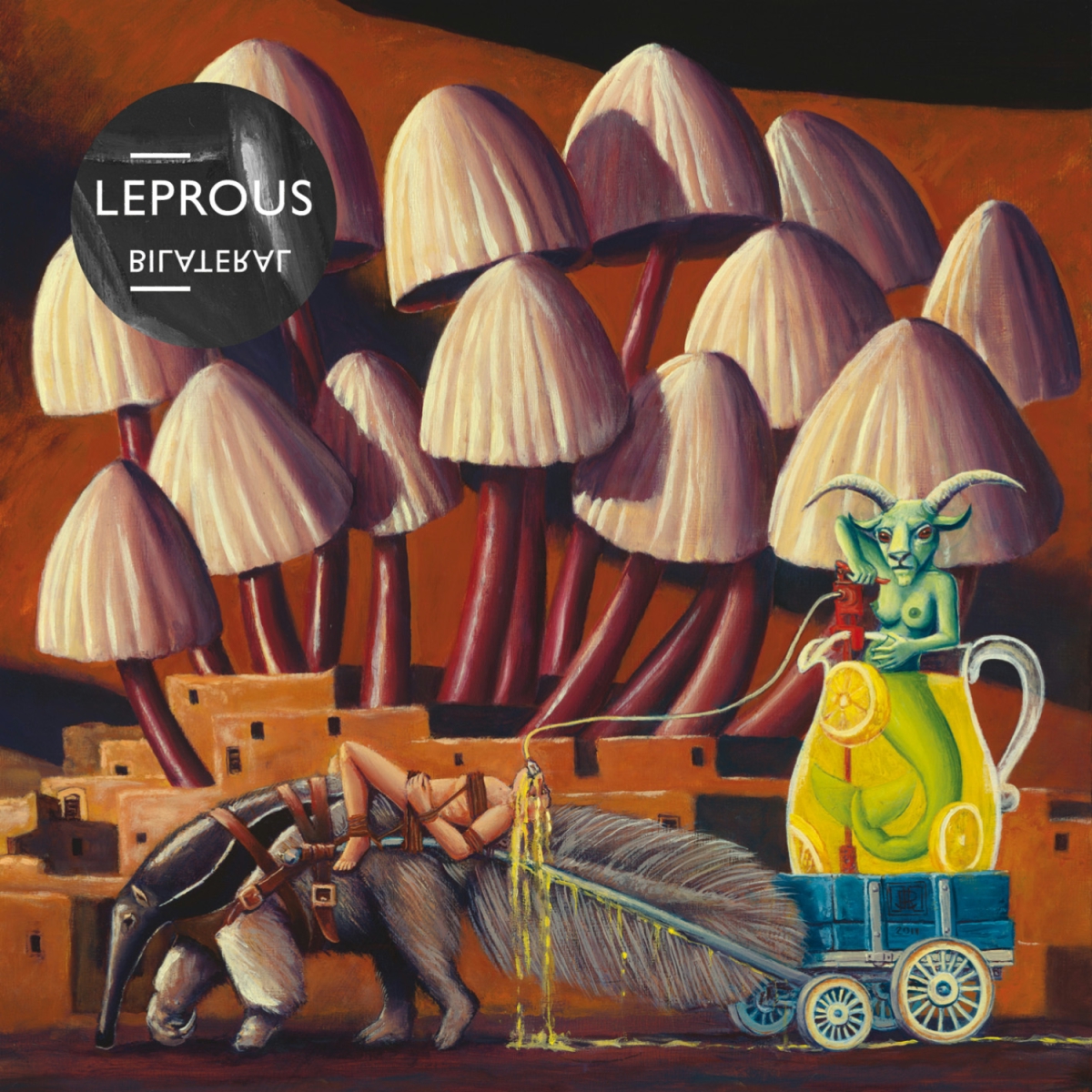 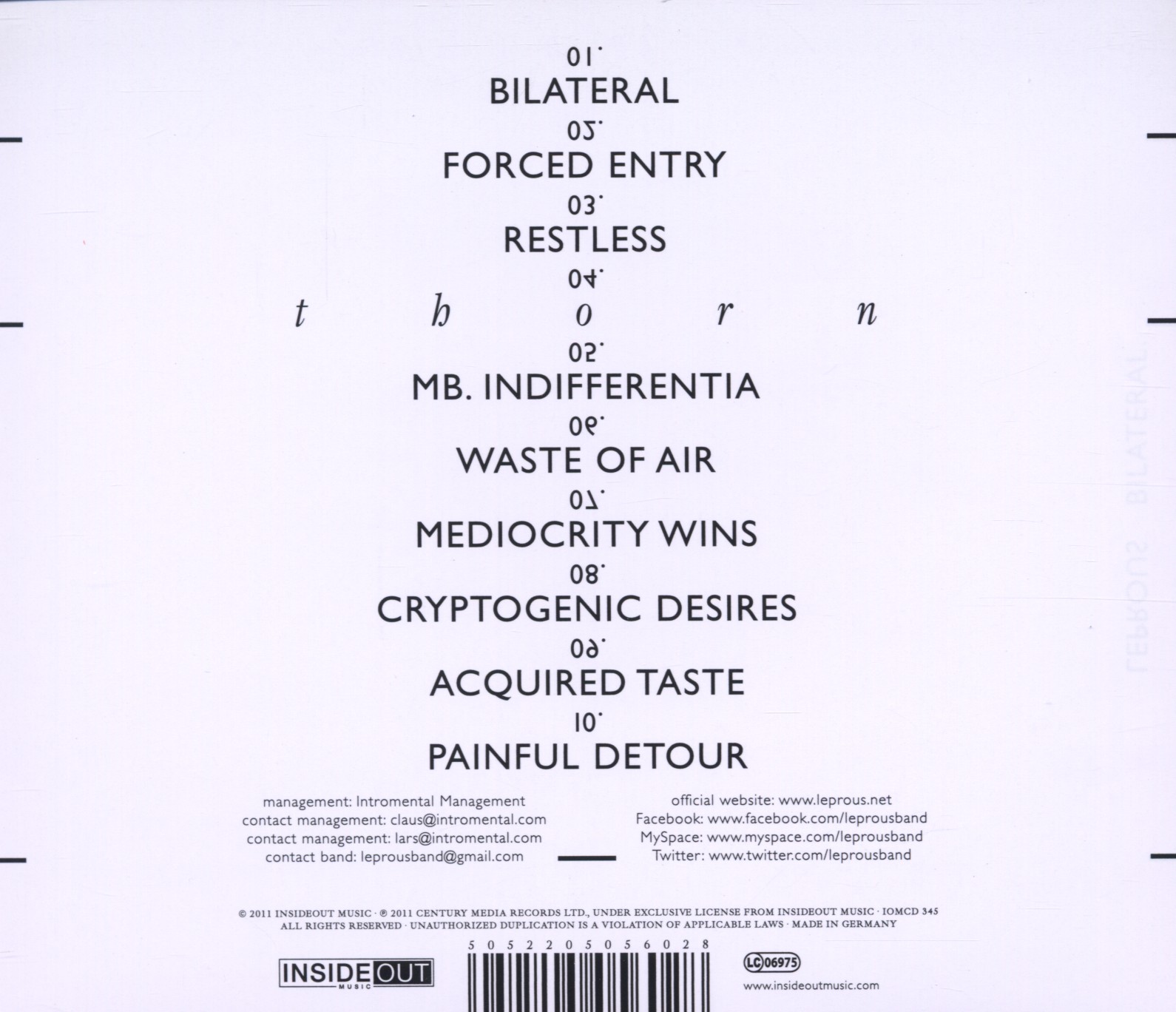 The stunning cover art for LEPROUS' third album and InsideOutMusic debut, Bilateral, was created by Jeff Jordan (of The Mars Volta fame) and screams “prog rock!”, as interpreted by the genre's hard core aficionados. The music found behind it re-defines what it means to be progressive rock and / or metal, both for the devotees of the genre and the metal fans looking on from a safe distance.

With 10 years of making music under their collective belt, the Norwegian quintet are a unique outfit in that, while they embrace the prog rock and metal "requirements" as laid out by the fans, the band's sound is equally rooted in straightforward hook-laden metal. For every part Pain Of Salvation and King Crimson one may hear, there is an equal amount of Shining (NO), Devin Townsend and Opeth to balance it out. Not an easy task by any means, yet LEPROUS makes it sound effortless.

"I'm not to fan of following genres in general," says vocalist / synth player Einar Solberg. "I feel many people are putting too many limitations on their work in order to follow the conventions set by the genre they belong in. In my opinion, that's the kind of things that kills creativity. The term progressive music has been gradually diluted through the years, and now it seems like the only requirement for being labeled as a prog band is that you include one or two odd time signatures plus a virtuous guitar solo in your song. The bands that truly deserves being titled as progressive bands are the bands who dare breaking with the conventions. That being said, I'm quite comfortable being labeled as a progressive band. The prog crowd seems to be slightly more open-minded than followers of other genres."

Bilateral is a product of five-part musical inspiration LEPROUS have had a decade to refine, despite the young age (between 20 and 26 years) of the current individual musicians that comprise the group. The experience of recording and touring behind their 2009 album release, Tall Poppy Syndrome, only proved to benefit the band. Chosen as backing band for former Emperor frontman and countryman Ihsahn - a progressive black metal metal musician / legend in his own right – not to mention countless shows supporting heavy hitters like Opeth, progressive metal stalwarts Pagan’s Mind and symphonic metal veterans Therion in 2009 and 2010 proved that musical boundaries could and should be broken.

According to Solberg, there was no blueprint to go by in making Bilaterial, and no other bands that LEPROUS aspired to follow: "When it comes to inspiration we have no band that stands out being the main one. We listen a lot to different music, everything from Michael Jackson to Miles Davis to Meshuggah. And, of course, a lot of bands in between (laughs)."

The new album is loaded with surprises. New heights are reached with Solberg's smooth and clean vocals, and he adds a new dynamic to the prog metal world with the casual performance of intense growls as well. On the musical front, Bilateral never stays in one place too long. The title track is a dark progressive metal classic in the making, while 'Forced Entry', 'Restless' and 'Cryptogenic Desires' hint at updated interpretations of classic symphonic hard rock, the latter two featuring a blatant metal vibe. 'Waste Of Air', on the other hand, is an uncompromising stab of intricate hook-heavy aggression reminiscent of upstarts Protest The Hero.

Joining the band on the album is not only something as out-of-left-field as a trumpet (trumpets in heavy metal? Well, yes … why not?), but also a guest appearance by none other than living legend Ihsahn, formerly of Norwegian black metal pioneers Emperor; "After recording the trumpet for ‘Thorn’, we realized there was something missing in the song. Wind instruments doesn't do well in metal without a certain black metal legend to back them up," Solberg comments.

On the other side of the coin, Bilateral echoes Pink Floyd and Porcupine Tree on tracks like 'Mb. Indifferentia', 'Acquired Taste' and 'Mediocrity Wins'. Yet, for all the name-dropping that's done in the interest of a Bilateral overview, LEPROUS most certainly have their own identity. They aren't afraid of marching to the beat of their own hammer and anvil, or daring you to come along for the ride and look at prog metal in a new light.