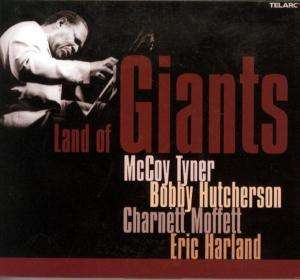 “The genesis of Land of Giants was the excellent review in The Guardian by John Fordham (who we engaged to write the liner notes),” says producer Elaine Martone. “After the Barbican concert, Adrian Mills, our Sales Director, asked that I contact McCoy and find out the possibility of recording this group. McCoy was happy to oblige, being the giant that he is, both in terms of his masterful musicianship and his wonderful heart. Bobby Hutcherson is a giant of his instrument as well. And with a nod to John Coltrane’s Giant Steps, we came up with an extraordinary recording.”

Tyner’s partnership with Hutcherson, easily one of the most influential vibes players in jazz and a veteran of many noteworthy recording sessions, goes back to the 1960s. Tyner calls Bobby Hutcherson “not only a good friend, but one of the world’s greatest musicians,” and his thoughtful, full-bodied solos shine throughout the album.

It’s not just the assertive style of the participants, but Tyner’s well-crafted compositions that make Land of Giants so special. More than a distinctive pianist, he’s also a superb composer and arranger. Here Tyner contributes seven of ten tracks, including the rousing opener “Serra Do Mar,” the airy, elegant “December,” and the surging “Steppin.’” “Manalyuca” is reminiscent of “Sama Layuca,” the title track of Tyner’s classic 1974 Milestone album (which also featured Hutcherson). With power and inventiveness, Tyner’s quartet romps through mid-tempo cruisers “Back Bay Blues,” “The Search” and “Contemplation.” Also among the tracks are inspiring takes on Frank Loesser’s “If I Were A Bell,” Sam Lewis and J. Fred Coots’ “For All We Know” and Duke Ellington’s “In a Mellow Tone.”

Born in Philadelphia, PA, in 1938, Tyner began studying piano at thirteen and was performing professionally within two years. It was in Philly that he first met and worked with John Coltrane. In 1959, Benny Golson offered him a gig at San Francisco’s Jazz Workshop. The young pianist spent half a year working in Golson and Art Farmer’s Jazztet. Tyner went on to become enormously well known for his groundbreaking work with Coltrane’s quartet from 1960 to 1965. During the same period he also made a series of influential recordings under his own name for Impluse! and Blue Note. Tyner established his big band in 1984.

His first recording with Telarc, McCoy Tyner and the Latin All-Stars (CD-83462), was released in 1999 and included Gary Bartz, Claudio Roditi, Steve Turre, Dave Valentin, Ignacio Berroa and Giovanni Hidalgo. Tyner has always excelled in trio settings, and his 2000 Telarc disc, McCoy Tyner with Stanley Clarke and Al Foster (CD-83488), was one of his most exciting. Jazz Roots: McCoy Tyner Honors Jazz Piano Legends of the 20th Century (CD-83507), released later that same year, was a vigorous solo tribute to great jazz pianists of the last century including Fats Waller, Thelonius Monk and Art Tatum.

“McCoy has taste,” Coltrane once said, summing up Tyner perfectly. “He can take anything and make it sound beautiful.”