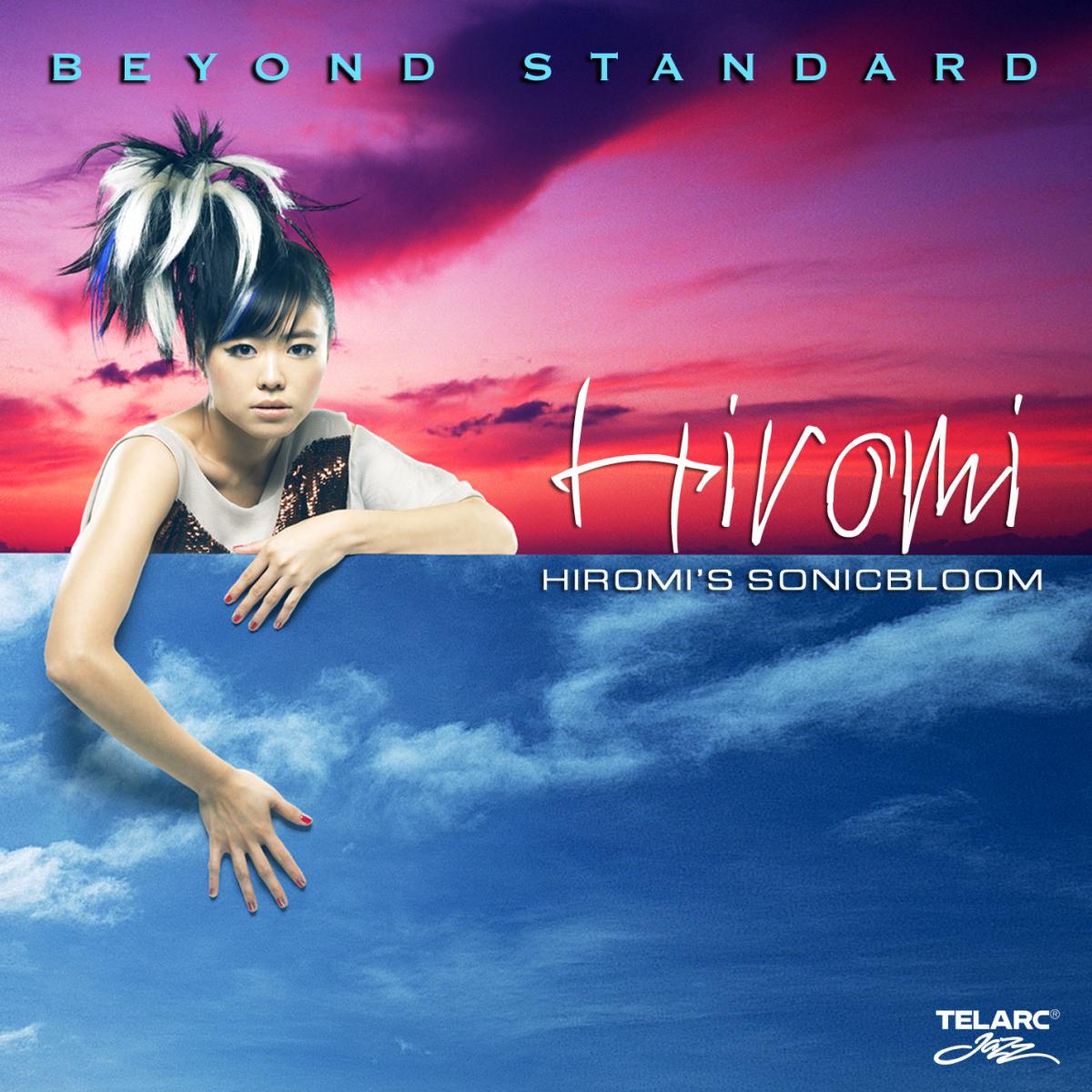 The group has been recognized for its energetic virtuosity by music industry and mainstream publications alike: Downbeat, JazzTimes, Keyboard, and The New York Times. Playing festivals such as Glastonbury, Fuji Rock, and Playboy Jazz proves that Hiromi’s unique fusion nuevo has been accepted in the world of jazz as well as rock. Beyond Standard is a showcase for Hiromi and her band’s abilities, with each player getting plenty of room to shine.

While most of the music on the album was penned by songwriters other than Hiromi, the album as a whole is a continuation of her previous release, Time Control (2007). Beyond Standard starts with a quick “Intro” that includes the popping and scratching sounds of a vinyl record, a signal that what you are about to hear are retro compositions performed in an updated and unique way. The music starts with an extension of her original tune, “Time’s Up,” the final track on Time Control. Hiromi then gives a dramatic voicing to the theme of “Softly As In A Morning Sunrise.” As the tune progresses, she and Fiuczynski trade some very playful fours, and Valihora takes a fresh approach, occasionally giving a backbeat to the jazz standard.

In keeping with her defiance of easy categorization, Hiromi then covers Debussy’s eternally beloved “Claire de Lune,” followed by the driving jazz standard, “Caravan,” written by Juan Tizol and made famous by Duke Ellington. Hiromi’s rendition has an almost Zappa-esque feel with a heart-pumping drum solo.

Hiromi and company deliver a unique rendition of Rodgers & Hammerstein’s “My Favorite Things,” a song from The Sound of Music that later became standard jazz repertoire thanks to John Coltrane. In a complete 180, the band follows Rodgers & Hammerstein with a cover of legendary rock guitarist Jeff Beck’s “Led Boots,” featuring keyboard work from Hirmoi that sounds very much like the whah-whah effect on an electric guitar.

“Ue Wo Muite Aruko” (“I Look Up When I Walk”) was the only Japanese pop song to make it to No. 1 on the American pop charts. The song was released in Japan in 1961 and in the United States in 1963. Hiromi takes the still popular song and turns it into a funky explosion.

“XYG” is Hiromi covering Hiromi. The track is an in-your-face adaptation of “XYZ,” a track from her 2003 debut album, Another Mind, with the addition of Fiuczynski’s roaring guitar (hence the “G”). The album closes with Hiromi on solo piano, putting her spice on the Gershwin classic, “I Got Rhythm.” She begins the tune with a playful, delicate touch that builds to landslide intensity with bone-breaking riffs.

Mentored by giants like Oscar Peterson, Ahmad Jamal and Chick Corea, Hiromi’s roots are in jazz but her music explores a world of new ideas by blurring the boundaries of pop, rock, classical, avant-garde and other genres.

Born in Shizuoka, Japan, in 1979, Hiromi discovered jazz when she took up the piano at age six. Within a year, she was a student of the Yamaha School of Music, whose progressive approach to musical training allowed the young student to tap into her emotions while mastering the technical aspects of writing and performing. At age 14, she went to Czechoslovakia and played with the Czech Philharmonic. Three years later, Corea invited her to perform with him. In 1999, Hiromi came to the United States to study at the Berklee College of Music in Boston.

Hiromi established her reputation when her 2003 Telarc debut, Another Mind – co-produced by Ahmad Jamal – shipped gold in Japan (100, 000 units) and won the Recording Industry Association of Japan’s (RIAJ) Jazz Album of the Year Award.

Her 2004 release, Brain, won the Horizon Award at the 2004 Surround Music Awards, Swing Journal’s New Star Award, Jazz Life’s Gold Album, HMV Japan’s Best Japanese Jazz Album, and the Japan Music Pen Club’s Japanese Artist Award (the JMPC is a classical / jazz journalists club). Brain was also named Album of the Year in Swing Journal’s 2005 Readers Poll. Back in the U. S., Hiromi has been featured on the covers of Keyboard, Jazziz, Billboard, All About Jazz-LA and Goldmine.

In 2006, Hiromi won Best Jazz Act at the Boston Music Awards and the Guinness Jazz Festival’s Rising Star Award. She also claimed Jazzman of the Year, Pianist of the Year and Album of the Year in Swing Journal Japan’s Jazz Readers Poll for her 2006 release, Spiral.

Beyond Standard is what happens when Hiromi’s Sonicbloom takes popular tunes out of the box and casts them in an entirely new light.
(concordmusicgroup. com)