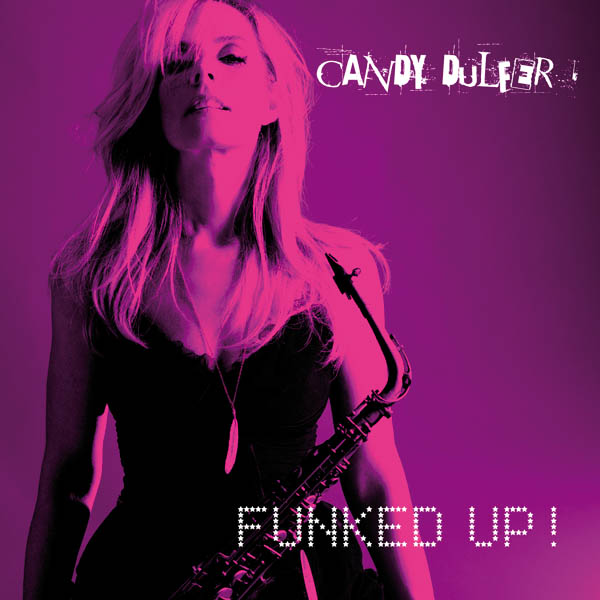 Nearly two decades after her GRAMMY®-nominated recording debut in 1990, saxophonist Candy Dulfer has earned a reputation as a high-energy performer with charisma and sex appeal to burn.

Dulfer bares it all – the brassy and edgy, along with a few mellow touches – with the May 12, 2009, worldwide release of Funked Up! on Heads Up International, a division of Concord Music Group. The 12-track set features the revved-up funk and R&B typical of her legendary live shows, laced with a few cooler, quieter grooves to keep things interesting.

The more lively tracks on Funked Up! started coming together not long after the 2007 release of Dulfer’s previous Heads Up recording, Candy Store. In the meantime, she and her band had been asked by Dutch filmmaker Fred van Dijk to record the soundtrack for Kissed by the Grape, a documentary exploring the world of organic winemaking. The film project steered them into a more ambient groove – the ideal complement to the rhythmically intense material that they’d already recorded.

“It came together over the course of a year and a half,” says Dulfer. “First, we had the beginnings of the album. Then we made the soundtrack to the movie. After that, we even wrote a couple more songs. It’s almost like a best-of album representing my funky and softer sides. It’s great when you have so many good songs, and you get to choose the ones you like best.”

With so much to choose from, the result is something for everyone. Funked Up! kicks off with the high-powered and percussive “First in Line,” a track built atop the rock-solid rhythm section of bassist Chance Howard and drummer Kirk Johnson, and augmented by the backing vocals of Dulfer and Monique Bakker (a recurring vocalist on Dulfer’s recordings). Assisting Dulfer with the brass is a three-piece horn section that includes trumpeter Jan van Duikeren, tenor saxophonist Guido Nijs and trombonist Louk Boudesteijn.

“My Funk,” one of Dulfer’s favorites, showcases the vocals of Pete Philly, one of the most prominent rappers in the Netherlands. “He just came in, heard the music and loved it,” says Dulfer. “He said, ‘Just leave me alone in this room for about twenty minutes.’ After a while, he came out and said, ‘Okay, I’ve got it.’ That’s the beauty of hip-hop artists. If they’re good, that’s the way they work. Like jazz musicians it’s a very intuitive, very immediate creative process.”

Midtempo and melodic, “Still I Love You” has already become part of Dulfer’s live show in recent months, and the early feedback has been very favorable. “We first played it in Japan, and we invited the Japanese audiences at the Blue Note to come up with ideas for the title,” she says. “We got a lot of great responses, but this very tall, very beautiful Japanese woman at one of our gigs wrote this title on a piece of paper and handed it to us. We knew immediately that it captured what the song was about.”

Full of sass and spice, vocalist Leona barrels through the rollicking techno-beat of “Step Up,” and later the reggae-flavored “True & Tender.” Dulfer calls Leona “a force to be reckoned with, a very talented singer and performer and entertainer. Before she put the vocal track down on ‘True & Tender,’ it was just a jam, and we didn’t even know if it would end up on the album. But she really made it her own.”

The nostalgic “CD 101.9” is a tribute to the former New York radio station that gave Dulfer and her band a lot of airplay around the time of their first visit to the States in 1991. In between the solos and chorus breaks are sound bytes from an original broadcast by veteran DJ Russ Davis hyping the band’s gig at The Bottom Line. “It’s from a cassette tape that my father had saved for years,” says Dulfer. “Thomas Bank, our keyboardist and producer, took the DJ’s comments and put them into the song. It’s such a great reminder of the first time I played in New York. Both the station and Russ helped me a lot in the early part of my career, and they helped launch a lot of other artists as well.”

Things slow down significantly with the smoky and suggestive “Bliss2This,” featuring rapper and trombonist Joseph Bowie of Defunkt. “I told him my feelings about this song reminded me of the deterioration of a relationship. He said, ‘I know exactly what you mean.’ A couple days later, he came back with a vocal track, and he put some really cool trombone tracks in there as well. I just played a little bit around what he did, and Chance Howard - who worked with us on Candy Store - put some beautiful vocals to it that gave it a bit more of an R&B groove.”

“Roppongi Panic” is the rhythmic closer that that allows Dulfer plenty of room to strut her stuff on top of a Euro-style keyboard shimmer. The track’s steady and insistent backbeat conjures a feeling of driving into the night in search of limitless possibilities.

Front to back, Funked Up! is a snapshot of all the benchmarks that make up Candy Dulfer’s live performances - lots of high-energy, in-your-face grooves, punctuated by intriguing moments of subtlety and nuance. “I love an album that has the same flow as, say, a movie or a book,” she says. “It starts slowly, then builds tension, and then you take it down a bit in certain places. That’s the kind of concert I play when I’m touring, and that’s what I wanted to capture on this recording.”

There’s something sweet and sexy happening here. Get some Candy and get Funked Up!
(concordmusicgroup. com)