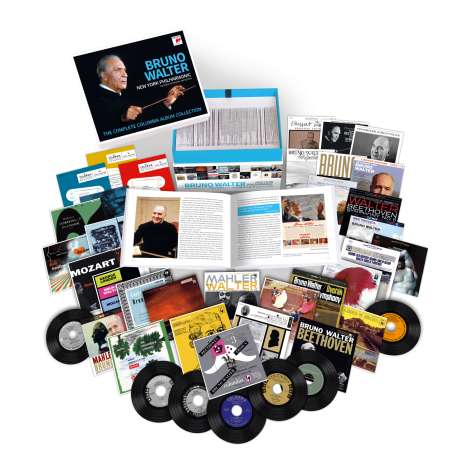 
He was Mahler’s disciple and friend in Vienna before World War I, then went on to become one of the most illustrious conductors of the century. Accordingly, the recordings that Bruno Walter made for American Columbia between 1941 and 1961, the year before his death, have always enjoyed a special authoritative status. Sony Classical is now proud to present his entire Columbia discography together for the first time in a single release of 77 CDs, with his complete stereo recordings newly remastered from the original analogue tapes and many early recordings new to CD. Born in Berlin in 1876, Bruno Walter (Schlesinger) was committed to the recording medium throughout his exceptionally long career, both before and after the rise of Nazism compelled him to emigrate from Germany and Austria. Though he recorded more than 150 different works, many of them in multiple versions, he concentrated on a handful of Austro-German composers: Mozart, Beethoven, Schubert, Brahms, Wagner, Bruckner and Mahler. His European swansong, conducting the Vienna Philharmonic, were the first-ever recordings of Mahler’s Das Lied von der Erde, in 1936, and Ninth Symphony, in 1938, both of which Walter himself had premiered in Vienna shortly after the composer’s death. In 1939, he settled in America (soon becoming the Beverly Hills next-door neighbor of Mahler’s widow Alma), where Walter guest-conducted many of the country’s top orchestras, but he made his studio recordings for Columbia almost exclusively with the New York Philharmonic (he turned down the orchestra’s music directorship in 1942, citing his age). Shortly after beginning work on Mahler’s “Resurrection” Symphony in February 1957, his first recording in stereo, the conductor suffered a heart attack. Subsequently, he curtailed his activities, sticking close to home in California though completing the Mahler recording in New York in February 1958. A month earlier, back in Los Angeles, he had already commenced a new Beethoven Symphonies cycle for Columbia with a select ensemble of musicians from the Los Angeles Philharmonic and Hollywood studios. Thus Walter launched his celebrated “Indian summer” series of recordings with the Columbia Symphony Orchestra, mostly remaking the classic Austro-German repertoire he had been setting down in New York but now with the advantage of modern stereo technology. Among the pleasures afforded by Sony Classical’s complete Walter set is the possibility of comparing versions and tracing Walter’s evolving approach to the symphonies, overtures and concertos he had been living with and performing for decades with “energy and grace”, to quote his biographers. While still cherishing all of them, one might conclude that there is a stronger emphasis on “energy” in the earlier readings of Beethoven he recorded with the New York Philharmonic (the Philadelphia Orchestra for the “Pastoral”) in the 1940s and early 50s and a stronger emphasis on “grace” in the Los Angeles stereo remakes from the late 1950s and early 60s – for example the radiant late “Pastoral”, an unsurpassable recording that captures in superb modern stereo the legendary beauty of Walter’s classic pre-war Vienna Philharmonic version and his 1946 Philadelphia remake, which is also included here. A similar comparison could be applied to his multiple recordings of Brahms, whose symphonies were premiered in Walter’s lifetime and whose chamber music he played as a pianist when it was still new. Similarly, his New York recordings of Mahler’s Second, Fourth and Fifth Symphonies will always retain their landmark status, while the valedictory qualities of his Los Angeles Ninth from 1961 richly fulfill the promise of his historically important but technically flawed Vienna premiere recording. And the 1960 Das Lied von der Erde, with Walter returning a last time to record with the New York Philharmonic, is arguably the most satisfying realization of that sublime score ever put on disc. He was a famous Wagner conductor in the opera house, and though he never made a complete recording, he did leave us tantalizing extended excerpts, including glorious Columbia Symphony performances of the “Prelude and Good Friday Music” from Parsifal and the “Prelude and Venusberg Music” from Tannhäuser (with chorus). Walter recorded Wagner’s Siegfried Idyll no fewer than six times in the course of his career, and his superb 1953 New York Philharmonic Siegfried Idyll is included in this set, marking its first appearance on CD, along with the last of the six, from LA in 1959, a reading of extraordinary tenderness and sensitivity. The love and care that went into it can be heard and felt in a priceless 45-minute rehearsal recording, also reissued here. Towards the beginning, Walter exclaims, “Everybody sings!”, and later he frequently exhorts his players to “sing” and avoid undue accentuation in long phrases in order to produce the “singing” instrumental quality that distinguishes his music-making. In this set, there are altogether seven precious discs of Walter rehearsing and of his recollections of Brahms, Bruckner, Mozart, Mahler, Johann Strauss, Vienna and his collaboration with Kathleen Ferrier, as well as spoken tributes by numerous major artists and producers. Most of this material is now issued for the first time on CD. Bruno Walter, as his biographers so aptly observed, “continually strove to make his listeners feel as if they were hearing a world première … The flat rejection of leaden routine, the wild-card element of sudden inspiration, the desire to penetrate to the core of a musical work – all helped to give Walter’s best interpretations an atmosphere of freshness, of first-time creation.” This new complete set of the immortal maestro’s American recording legacy will be an inexhaustible source of joy for all lovers of great music and great music-making.

Concerto No. 5 in E-Flat Major for Piano and Orchestra, Op. 73 'Emperor'

Symphony No. 4 in G Major

Symphony No. 5 in C-Sharp Minor

Variations on a Theme by Joseph Haydn, Op. 56a - Remastered

Concerto for Violin and Cello in A Minor, Op. 102

Symphony No. 2 in C Minor 'Resurrection'

Concerto in A Minor for Violin, Cello and Orchestra, Op. 102 'Double Concerto' - Remastered

Symphony No. 9 in D Major - Remastered

Symphony No. 9 in D Major - Remastered