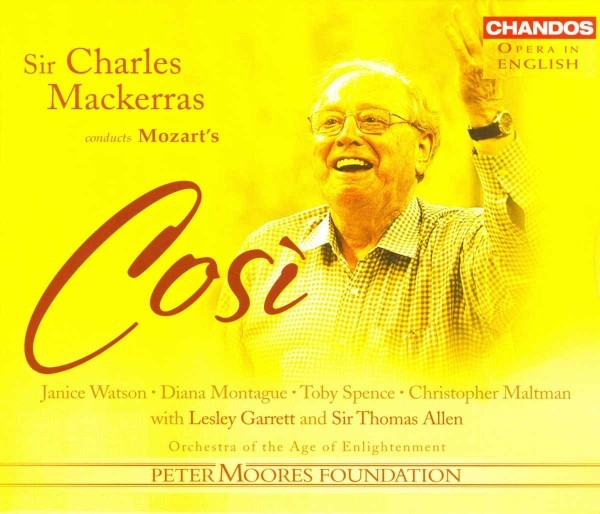 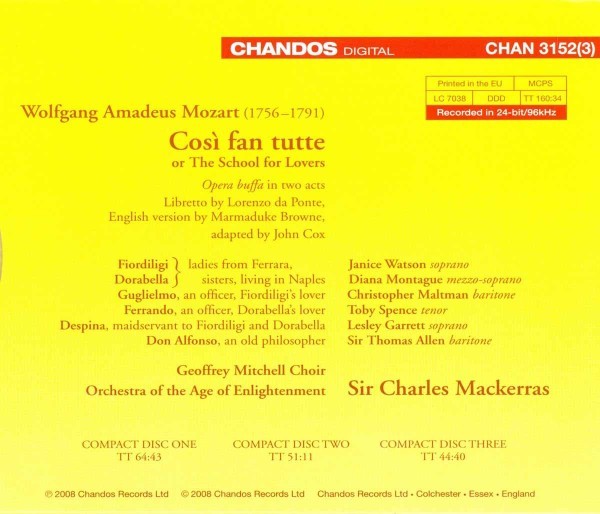 Così fan tutte is Mozart’s third opera to a Da Ponte libretto. It is in opera buffa style and has only six characters, two couples and an elderly philosopher and a trusted maid. In this recording Lesley Garrett sings the part of the maid, Despina, and the celebrated veteran Sir Thomas Allen the philosopher, Don Alfonso. Despite the somewhat cynical storyline this opera contains some of Mozart’s most memorable and sublime music. The conductor, Sir Charles Mackerras, has spent many years researching performance practice of the eighteenth and nineteenth centuries and is a noted authority on Mozart’s operas. He writes of this recording, ‘it is indeed a pleasure having the Orchestra of the Age of Enlightenment lending its expertise in tonal colour, phrasing and rhythmic impulse to Mozart’s wonderful score… I have chosen to record this English version of Così fan tutte with the traditional cuts, thus making it closer to a staged performance’. The English translation, by the Rev. Browne, was first used in London at a performance conducted by Sir Charles Villiers Stanford in 1890.

Mackerras is a hugely talented conductor, now over 80 years old, with a wealth of experience to bring to this his twelfth recording on Chandos Opera in English. Indeed, his recording of Humperdinck’s Hansel and Gretel, which also appears on the Chandos Opera in English label, has just won the 2008 Grammy award for Best Opera. On his recording of The Magic Flute, The Sunday Times commented, ‘Mackerras is perhaps the world’s wisest and most enquiring Mozartian, and here he gets playing of magical transparency from the LPO… bringing a sense of wonder to the music now rarely experienced in the theatre’.

"With Sir Charles Mackerras in charge, a lifetime as an exemplary Mozartian seasons this fine recording of the last of Mozart’s Da Ponte operas sung in English, it draws on veteran as well as newer talent." The Observer

"There seems to be no limit to Sir Charles Mackerras’s capacity for finding new joys and beauties in the works he conducts. This Cosi, in Peter Moores’s Opera in English series is a sheer delight, with an ideal balance between humour, poignancy and satire." Sunday Telegraph

"I have an aversion to Italian opera sung in English on CD, but this Cosi proves that style can slip through the translation. That it does so is entirely due to Mackerras and the Orchestra of the Age of Enlightenment, who transmit a vital, lightly worn authority," Financial Times

"This is an account of Cosi which seems to put momentum first. The opening chord, more ferocious than one would expect, gives way to a rattling overture, and tension and pace never let up." BBC Music Magazine