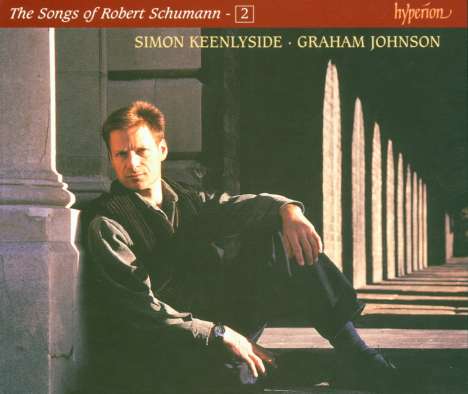 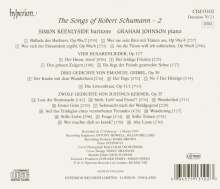 The second volume of the Hyperion Schumann Edition returns to four of the poets whose lyrics were included in the inaugural issue of the series: Goethe, Geibel, Lenau and Kerner. Of these, Geibel and Kerner were only fleetingly featured; more substantial examples of their work are to be heard in this volume. On the other hand, the four short Nikolaus Lenau songs recorded here (Husarenlieder, Op 117) are less significant than the Op 90 Lieder in Volume 1; a biographical note and portrait of this poet will be found on pages 12 / 13 of the booklet accompanying that disc. Emanuel Geibel, here represented by the three songs of Op 30, will be featured, together with a short biography, in a later volume to include his Spanish-inspired song cycles for four voices. With the ballad Die Löwenbraut there is a preview of an important Schumann poet, Adalbert von Chamisso, whose life and work will be discussed in Volume 3 which will include the Chamisso cycle Frauenliebe und -leben sung by Juliane Banse. Justinus Kerner is the major poetic presence in the present volume, and there is a biographical note on him later in this booklet. It so happens that there is a link between Lenau, Geibel and Chamisso through Kerner, who met and knew them all. The role of Johann Wolfgang von Goethe is equally important in both Volumes 1 and 2. As is often the case in recordings of Lieder, his presence seems benignly majestic, as befits the Teutonic Shakespeare, the founding father of German song.

'The young English baritone's gorgeous timbre now sounds in prime condition and his understanding of the German Lied is second to none. His programme, too, is characteristically adventurous. Johnson, too, is deeply immersed in this music and his 82-page booklet is a collector's item.' (The Sunday Times)