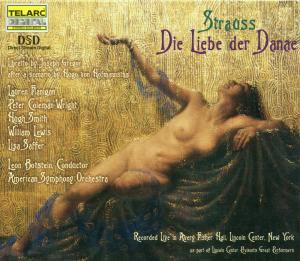 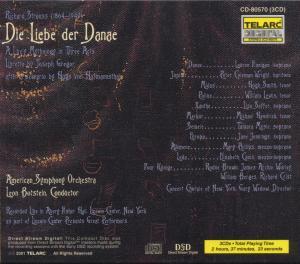 Richard Strauss composed the three-act opera Die Liebe der Danae, his penultimate opera, during a difficult period in his life, in the late 1930s just before the outbreak of World War II. He completed the score in 1940, but the fully staged premiere of the work was delayed until three years after his death because of the outbreak of hostilities. It was premiered in Salzburg in 1952.

The story is based on a scenario by librettist Hugo von Hofmannsthal, who died in 1929 before he could finish the complete libretto. The scenario was adapted and completed by Josef Gregor, and tells of two mythical characters—King Midas (of the "golden touch") and the god Jupiter (appearing in the guise of a shower of gold—who vie for the love of the beautiful Danae, daughter of the impoverished King Pollux of Eos. Danae is at first seduced by Jupiter’s shower of gold, but as the opera progresses, she falls in love with Midas, who unthinkingly transforms her into a golden statue when he embraces her passionately. Midas and Jupiter have a confrontation, in which Jupiter reminds the King that his gift of the golden touch can be taken away at Jupiter’s whim. At last, Jupiter allows Danae to make her own choice of mate. She chooses Midas, even though in doing so she gives up the gold and riches of her dreams, as Jupiter returns Midas to his original state—that of a humble donkey-driver. The opera ends with Danae contemplating her marital bliss, and Jupiter facing the fact that he can never have an ideal, human love.

This recording was made live at Lincoln Center in January 2000. Tackling the demanding title role is the radiant soprano Lauren Flanigan, whose performance New York Magazine critic Peter Davis termed "expressive and dramatically alive..." Ms. Flanigan is known for her numerous acclaimed appearances at both New York City Opera and the Metropolitan Opera. She has premiered many important contemporary operas, including John Corigliano’s The Ghosts of Versailles at the Met, and Hugo Weisgall’s Esther at the New York City Opera.

Leon Botstein, music director and principal conductor of the American Symphony Orchestra, has established a reputation for rediscovering masterpieces and introducing them once again into the orchestral repertoire. He has made several highly praised recordings for Telarc, including the Dohnanyi Symphony No. 1 in D Minor; the Bruckner 5th Symphony in the Schalk edition; symphonies of Karl Amadeus Hartmann; and most recently, music of Szymanowski. (concordmusicgroup. com)