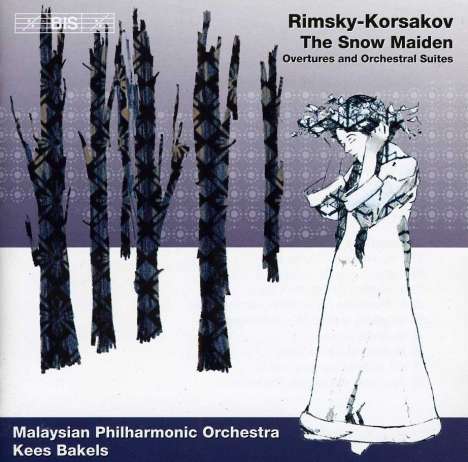 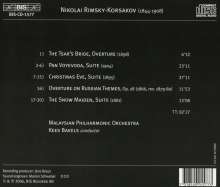 While Rimsky-Korsakov nowadays is mainly known for orchestral works such as Sheherazade, Capriccio Espagnol and The Flight of the Bumle-Bee, a large part of his oeuvre consists of works for the stage, in which his imaginative and colourful orchestration contributed greatly to the dramatic effect.

The present disc, last of a four-part survey of Rimsky-Korsakov's orchestral works, contains music mainly intended for the opera house: three suites from the operas The Snow Maiden, Pan Voyevoda and Christmas Eve are complemented by the overture to the opera The Tsar's Bride and the Overture on Russian Themes. (The latter is the one piece of pure concert music on the programme, but even here we find an operatic connection: its opening features the »Slava« ( »Glory« ) theme that Mussorgsky used for the coronation scene in Boris Godunov.) Previous releases in this series have been roundly praised by the reviewers not only for the »overwhelming« commitment and »very musical partnership« of the Malaysian Philharmonic Orchestra and Kees Bakels, but also for the recordings themselves: »Sonically these performances remain in a class of their own. The brilliance and realism are simply breathtaking, with a full dynamic range, ideal depth and breadth of soundstage, firm bass, open highs, and a panoramic splendor unrivaled on disc« wrote the critic of web site Classics Today.