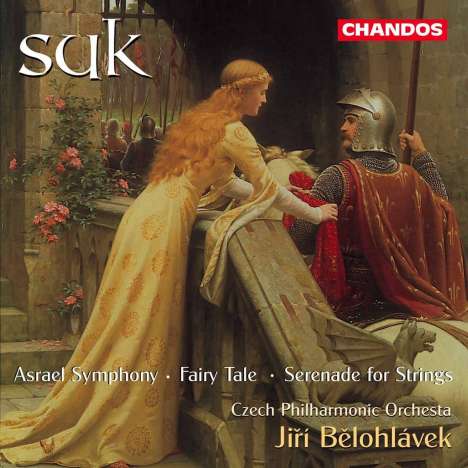 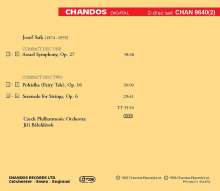 Suk’s Asrael Symphony was his greatest musical memorial. It was his chosen way to express the loss of Dvorák, his teacher and father-in-law.’Asrael’ is the name of the Angel of Death who, according to Muslim folklore, carries away the souls of the departed.

The Serenade for Strings is one of Suk’s sunniest works.

Pohádka provides us with a valuable insight into Suk’s great ability to express deep human emotions with his wonderfully lyrical writing. The Suite includes some of his most beautiful music.

The Asrael Symphony - Suk’s memorial to Dvorák - was to be a large-scale five-movement work, which was to end with a further musical tribute in a set of variations of a celebratory finale. He began the work in 1905 and had completed the first three movements by July. It was while working on the fourth that his dearly loved wife Otilka (daughter of Dvorák) died at the age of twenty-seven. By the end of December he had started a new fourth movement and changed his conception of the finale. These last two movements had now become his equally deeply-felt memorial to Otilka.

Opera was a form never embraced by Suk. The nearest he came to it was the cincidental music for Julius Zeyer;s fairy-tale drama, Radúz a Mahulena - a play in four acts and seven scenes based on the Slovak folk story of the surmounting of adversity through the strength of the love of a prince and princess. Suk’s involvement grew as the story gripped him, until the last act the action was almost totally supported by his music.

The chances of the play receiving regular performances were remote, so he decided to salvage the music in the form of a four-movement suite, his Pohádka (Fairy Tale) incorporating all the main musical material. He began work on the suite at his home Krecovice in September 1899 and had completed the first two movements by the end of that month. The last two movements were completed by June 1900.

The majority of Suk’s first twenty-five works were written in a minor key. Dvorák was keen to get Suk to write music which was less inward looking and predominately in the major, so he decided to set him a summer task in that vein. 9At this time, Suk was beginning to show a romantic interest in Dvorák’s daughter, Otilka). He wrote the first three movements of the Serenade at his family home during the summer of 1892. Although it contains many elements pointing towards the individual characteristics of Suk’s style, it is of course inevitable that there too Dvorák’s Serenade can be heard as a strong influence.

'Jirí Belohlávek, the principal conductor of the Czech Philharmonic, draws powerfully expressive playing from the orchestra in a work which in its five large-scale movements is predominantly slow. Next to Pesek's fine Liverpool performance, the speeds flow a degree faster and more persuasively, and the ensemble, notably of the woodwind, is even crisper, phenomenally so. It helps too that the sound is warmer, closer and more involving ' Original Penguin Guide review (*** Rosette winner)

"The combination of Jiri Belohlavek and the Czech Philharmonic is unbeatable when it comes to the usic of Josef Suk ..." ***** Tim Ashley - The Guardian - 31 July 1998