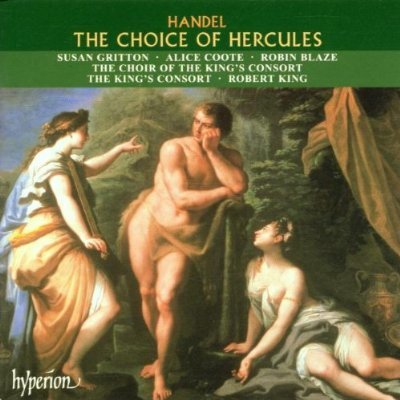 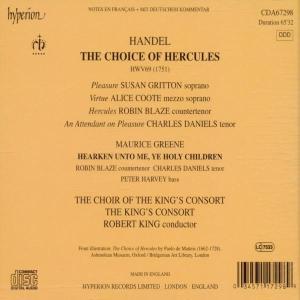 Robert King follows up his recent, resplendent, critically acclaimed reconstruction of the Coronation of King George II (CDA67286) with some more Handel, this time in the form of his lesser-known one-act dramatic cantata, The Choice of Hercules.

When Handel introduced English oratorios to London in the 1730s, he did not confine himself to sacred subjects, exploring also Classical myths, with texts based on Roman and Greek literature. The Choice of Hercules marks Handel's last realisation of a Classical tale. It started life in 1749 as music for Alceste, but the Covent Garden production was cancelled, leaving Handel with an hour of superb music on his hands. By the summer of 1750 he had adapted several numbers and added new ones, and in 1751 it premiered as ›an additional New Act‹ concluding a performance of the ode Alexander's Feast. Much of the music from the original conception (the story of a loyal wife who dies to save her husband and is subsequently rescued from the Underworld by Hercules) transferred easily to its new guise, for example the noble opening Sinfonia, originally intended to mark Hercules' return from the Underworld, now entirely apt for the entrance of the young Hercules in the new drama.

Hercules' choice is thus: on the verge of manhood, he is contemplating his future when two women appear to him. One, Vice, eager and seductive, shows him a path which seems to offer easy progress to a life of indolent pleasure. The other, tall and beautiful and identified as Virtue, warns Hercules that what is truly good can only be obtained through hard effort; and only then can Hercules gain supreme glory.

Also on this disc is an anthem by Maurice Greene, a contemporary of Handel, and by all accounts an arch rival, particularly when Handel was chosen above Greene by George II to write the new anthems for his coronation.

Full marks to Robert King who has assembled yet again a formidably superb collection of artists to perform this particularly attractive repertoire.

»This is a lovely performance. All the soloists are in exceptionally good voice … Robert King directs proceedings with his spry confidence« (Evening Standard)

The Choice Of Hercules Hwv 69 (Gesamtaufnahme)