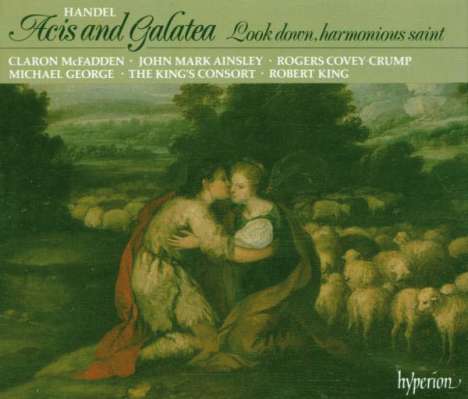 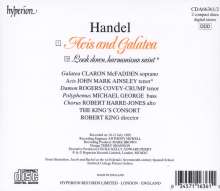 Acis and Galatea was one of Handel’s most popular works, revived no fewer than eight times and performed at least seventy times by the middle of the century. It was also one of the few large scale-works to remain popular after his death: Mozart re-orchestrated it in 1788 for the celebrated concerts of music organized by van Swieten, Mendelssohn performed it in 1828, and Meyerbeer even planned a staged performance of it in 1857. It was in fact Handel’s second setting of the myth, for the first, a serenata entitled Aci, Galatea e Polifemo, had been composed in Naples in 1708, probably for the wedding of the Duke of Alvito. We know little of the first performance of the Masque, which was a private affair at Cannons, other than a letter from Sir David Dalrymple to the Earl of London in May 1718 which mentions Handel being at work on a ‘little opera’. A manuscript of the score was included in a catalogue of the Duke’s music library made in 1720, and although Handel’s ‘conducting score’ of 1718 does not survive, several contemporary manuscripts do, including one in the British Library.

Acis and Galatea is first mentioned as being a ‘Masque’ in the Duke’s catalogue of 1720. The heyday of the form had been nearly a century before when mime, music, dancing, spoken dialogue and lavish spectacle had been combined by figures such as Ben Jonson and Inigo Jones to make court entertainments of great splendour. The Masque never again recaptured the full glory of its Elizabethan form, but it did continue to serve as entr’actes in plays and operas for many years. In early eighteenth-century London the form recurred, partly as a home-grown reaction against the increasing popularity of Italian opera. Mostly these masques were short operas on pastoral or mythological subjects, usually divided into two ‘interludes’ or ‘entertainments’, and Handel would certainly have had first-hand experience of the work of two principal providers, the composer Pepusch and the poet John Hughes.

'McFadden is a loving Galatea, Ainsley a charming Acis, and Covey-Crump a finely polished Damon. Michael George is magnificent - a nimble but ferocious Polyphemus whose every note is absolutely centred' (BBC Music Magazine Top 1000 CDs Guide)