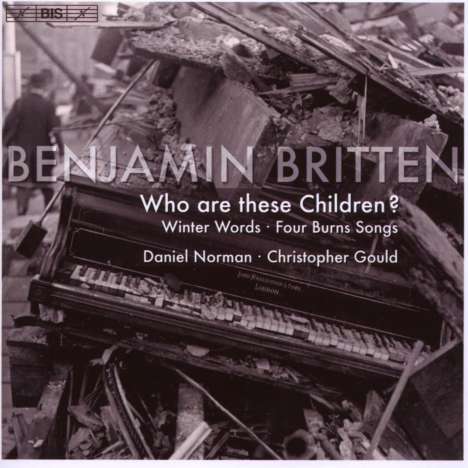 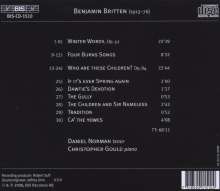 Artikel am Lager
-70%
EUR 19,99**
EUR 5,99*
Versandkosten
Lagerräumung
This Britten recital combines two of the composer’s major song cycles, Winter Words, from 1953, and Who are these Children? (1969). In them he explored themes of loneliness, transcience and war – difficult and harrowing material which would test any composer, but Britten is equal to the challenge. His music works its magic by bringing out poignant emotions and subtle insights, sometimes even more vividly than the texts on their own. The music’s emotional depth is grounded in compelling, quasi-naturalistic sound images, such as the whistling, rattling train in the setting of Thomas Hardy’s Midnight on the Great Western. For the cycle Who are these Children? Britten turned to the relatively little-known poet William Soutar, choosing to intersperse Soutar’s intense English language war poems with the poet’s riddles and verses in Scots dialect. Providing a lighter note between these gripping works are four settings of poems by Robert Burns, containing some of Britten’s most deft and delicate music. Composed on the request of Queen Elizabeth II in 1975, they originally formed part of a set of six songs for high voice and harp, and were later arranged for piano by Britten’s assistant Colin Matthews.

Britten often made more settings of his favourite poets than he eventually included in particular cycles. The present programme includes two further Hardy songs and three additional Soutar settings, forming a ‘mini-cycle’ of their own. In an encore, Robert Burns also reappears in Britten’s arrangement of the traditional setting of the poet’s atmospheric Ca’ the yowes.

Daniel Norman, tenor, has appeared on two previous BIS recordings, as soloist in Beethoven’s 9th Symphony conducted by Osmo Vänskä, and with the Berlin Philharmonic Wind Quintet in Winter Songs by the composer Brett Dean. He and Christopher Gould studied together at the Royal Academy of Music and the Britten-Pears School, and have been performing together since 1996. From early on in their collaboration, Britten’s music has played an important role, and they first performed Who are these Children? at the Aldeburgh Festival in 1999.

Who are these children op. 84