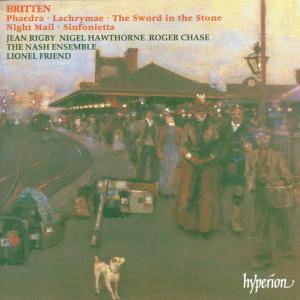 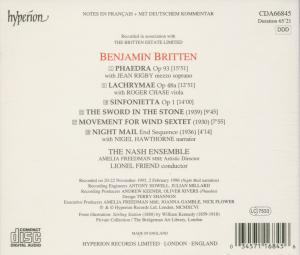 This recording brings together a remarkably diverse number of works from virtually the entire span of Britten's mature composing career, beginning in 1930 with a movement from an early Wind Sextet and extending as far as his last major vocal composition, Phaedra, written over forty-five years later. Two works receive their first recording.

Phaedra represents the distillation of a lifetime's expertise in operatic composition and remains one of the most dramatic cantatas for soprano in the repertoire: the story of Phaedra's incestuous infatuation with her step-son Hippolytus and her subsequent suicide is presented with chilling effect. The famous Lachrymae is here performed in the arrangement for solo viola and string orchestra made by Britten in the last year of his life.

The Sinfonietta and the movement for wind sextet are both much earlier works and yet, despite their 'student' status, are remarkably assured examples of Britten's later style. The Sword in the Stone (a BBC commission for incidental music to T H White's novel) has elements of Wagnerian pastiche and the Night Mail End Sequence, with W H Auden's famous poem (This is the night mail crossing the border, / Bringing the cheque and the postal order ...), was composed for the most famous of all 1930s documentary films.

'A chronologically wide-ranging Britten programme performed with unerring sensitivity and much quiet insight. With first-rate sound and balance throughout, this is an excellent anthology' (Gramophone)

'A fascinating disc in which the straight line from early to late Britten is highly visible' (Fanfare, USA)

'A fascinating collection of neglected Britten, excellent playing from the Nash Ensemble and first-rate recording' (The Penguin Guide to Compact Discs)

The Sword in the Stone