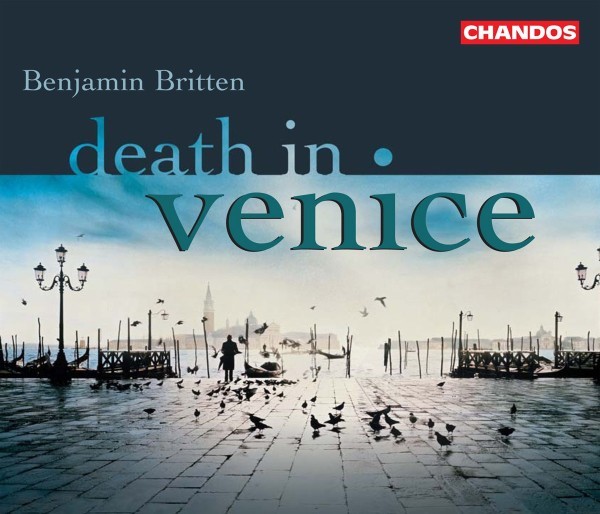 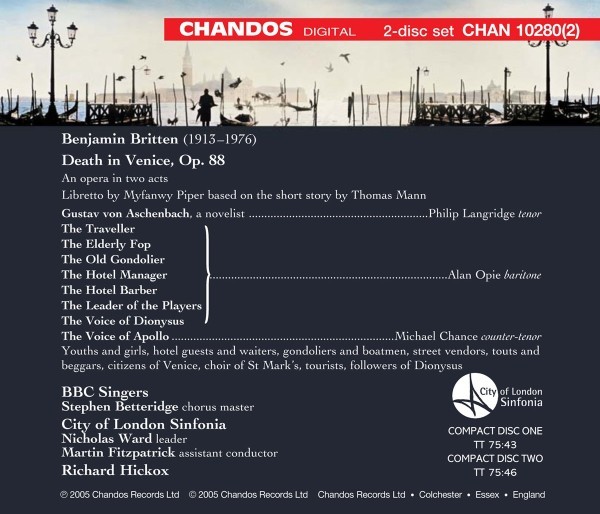 »It’s either the best or the worst music I’ve ever written«, wrote Benjamin Britten in a letter shortly after completing the first draft in December 1972 of what would prove to be his last opera. The work, which took a little over two and a half years to write, and came at serious personal cost: »I wanted passionately to finish the piece before anything happened«, he said, postponing vital heart surgery. The eventual operation, thus delayed, was not wholly successful, and considerably shortened the composer’s life.

The opera is based on Thomas Mann’s Der Tod in Venedig, published in 1912. Britten had known about the novella for some time (he had a reputation for gestating projects over many decades) but the themes could hardly have been more topical for the late twentieth-century, a time when traditional attitudes towards homosexuality were becoming increasingly under scrutiny. Mann once wrote about the subject of his novella:
»What I originally wanted to deal with was not anything homoerotic at all. It was the story – seen grotesquely – of the aged Goethe and that little girl in Marienbad whom he was absolutely determined to marry. Passion as confusion and as a stripping of dignity was really the subject of my tale.«

Mann’s story concerns Aschenbach, a famous writer suffering from writer’s block, who falls passionately in love with a beautiful young Polish boy during a holiday in Venice. Britten’s opera – although it certainly portrays Aschenbach’s passion moving through stages of ›confusion‹ and ›the stripping of dignity‹ – is more about the right of the individual to express himself, both in art and in love without fear of social and legal censure. The novella takes the form of a stream of consciousness monologue and the librettist, Myfanwy Piper, gave shape to the work by turning the musings of Aschenbach into elements of a kind of psychological thriller.

»Here the emphasis is on tonal beauty. Beautiful singing, beautiful playing, even a slight lingering over – a slight stretching out – of particularly beautiful passages. Yet there is full measure of drama expressed though exquisite diction. Langridge is regarded as the leading interpreter of Britten’s tenor music, and here he certainly lets us hear why… The orchestra plays magnificently; they sound rich, warm, smooth as silk. Tempos are a bit slower than Britten’s, without the composer’s drive – gentler and just a shade under Britten’s fullness and emotional grandeur. Recorded sound is broad and clear.« American Record Guide

»It is superbly recorded in Chandos’s most dazzlingly ‘present’ and realistic sound and quite wonderfully conducted by Hickox, the most convinced and convincing of the second-generation Britten conductors, who gets world-class playing from the City of London Sinfonia (and especially its virtuoso wind and tuned-percussion soloists)…. A triumph for Langridge, Opie, Hickox and Chandos, without a doubt, and one of the truly memorable records of the year, I think.« International Record Review

Although most of Britten’s major operas are established on the international circuit, ‘Death in Venice’ has yet to claim its rightful place. Hopefully this new recording in Richard Hickox’s Britten series…will help advance its cause. The performance is beautifully played and recorded, and in its all-important central role reunites Richard Hickox with Philip Langridge, so compelling in their earlier set of ‘Peter Grimes’. Gramophone (Editor’s Choice)