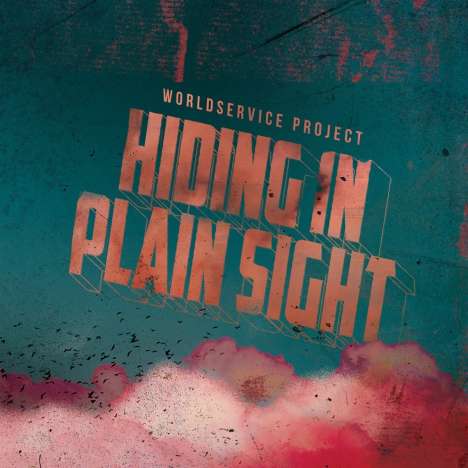 Over the course of its previous four albums, UK punk-jazz outfit WorldService Project carried its keen-edged, window-rattling irreverence across the globe, casting an eviscerating glance inward while spreading its message of chaotic compassion to the scattered remnants of the former British Empire and beyond.

With the release of the gleefully anarchic Hiding In Plain Sight, the band's fifth album and third for RareNoise Records, keyboardist-vocalist Dave Morecroft takes on his native land from an outsider's perspective for the first time, having decamped for Rome in his own personal Brexit. Not that the romance of the Eternal City has dulled Morecroft's incisively funky edge, however. Hiding In Plain Sight with the band's trademark blend of free-jazz pandemonium, pulse-quickening grooves, daggers-drawn sardonicism and audacious punk abandon.

The album perfectly channels the meltdown of modern civilization into a cathartic dance party on the far edges of the lunatic fringe, with an open-armed embrace of all comers save the power-hungry few that led us into this mess in the first place. For this latest incarnation of WorldService Project, Morecroft assembled a streamlined group that adeptly navigates the composer's perilous straits between taut avant-funk discipline and feral improvisatory blowouts. Bassist and vocalist Arthur O'Hara has been a mainstay of the band since 2015, though the remainder is an alchemical admixture of newcomers: saxophonist Ben Powling, drummer/percussionist Luke Reddin-Williams and, on four of the album's nine tracks, trombonist Kieran McLeod.