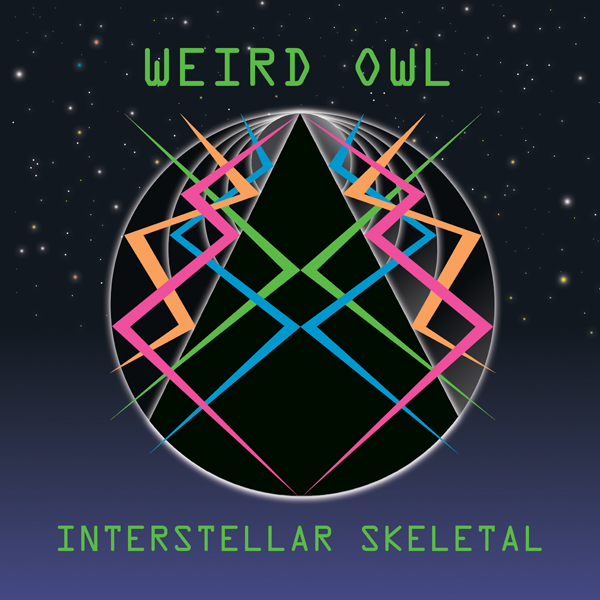 *** Gatefold Cover
Coming shortly on the heels of their 2013 »mini-LP« Healing, Weird Owl are back in 2015 with a full-length LP entitled Interstellar Skeletal, once again being released by »a« Recordings, Ltd. For the first time in their ten-year history, Weird Owl have kept the same lineup for consecutive releases, and Interstellar Skeletal reveals further explorations into the psychic canyons mined on Healing. Rather than scrapping the mission and returning to base for debriefing before attempting a relaunch, Weird Owl's strange sonic rocketry has ventured ever deeper into the vast starry expanse, and their transmissions back to Earth have grown ever freakier as a result. Their psychedelic postcards are written in the cosmic breathiness of the synthesizer and the alien ululations of a guitar tuned to secret frequencies, rumbling through the ages on illuminated rhythmic grids. Each track on Interstellar Skeletal serves as an interdimensional portal to free zones beyond the usual terrestrial veil, whether it is via odd jungle shamanism (»Silver Ziggurats«), the WWII bomber as spiritual metaphor (»Flying Fortress«), death personified as an albino lycanthrope (»White Werewolf«) or the unsettling might of an extraterrestrial deity crashing a beach picnic (»God«). Interstellar Skeletal was recorded and mixed by Jeffrey Berner (Psychic TV, NAAM, Dead Stars) at Galuminum Foil Studio in Brooklyn in the fall of 2014, following Weird Owl's first-ever European tour. Although neither meticulously aped nor mindlessly conjured, the familiar influences of Spacemen 3, The 13th Floor Elevators and The Brian Jonestown Massacre continue to find a home in Weird Owl's music, perhaps mostly in spirit form.