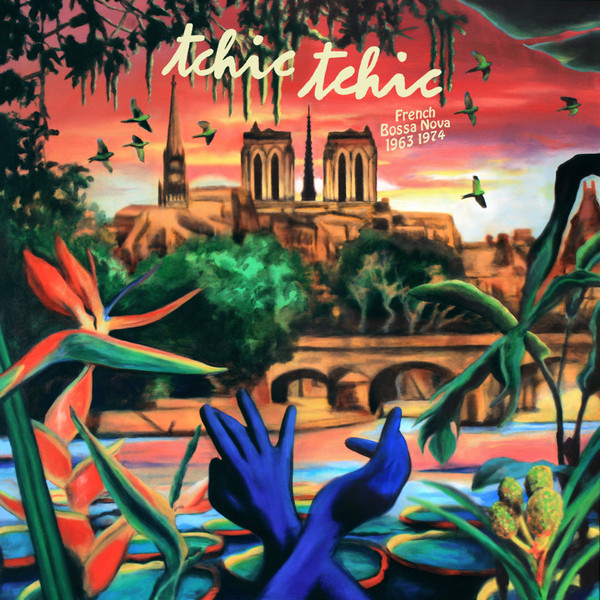 Ever since the late 1950s bossa-nova revolution, Brazil's influence on French music has been undeniable. Pierre Barouh, Georges Moustaki and a vast array of lesser known artists, all made the Musica Popular Brasileira (MPB) an axis of promotion at the service of a cool and metaphysical, modern and mixed Brazilian lifestyle. Some were seduced by the poetic languors of the bossa, some were looking for fun, and others just loved the American hybridization of jazz-bossa, jazz-samba. What is bossa nova? One of its creators, Joao Gilberto said: »Its style, cadence, everything is samba. At the very start, we didn't call it bossa nova, we sang a little samba made up of a single note - Samba de uma nota so .... The discussion around the origins of bossa nova is therefore useless«.

It is nevertheless useful to remember that these magnificent Brazilian songs, which the guitarist describes as samba, were shifted and balanced around improbable chords. »I like things that lean, the in-betweens that limp with grace,« said Pierre Barrouh, quoting Jean Cocteau. With emotion, arrangements for violin and supple guitar licks, bossa nova rapidly changed. A transformation that can be heard in the Tchic, tchic, French Bossa Nova 1963-1974 compilation, the result of a cultural reappropriation, which traveled through the United States and supplemented itself in France. A musical revolution that has remained significant, bossa nova was born in Rio. From 1956 to 1961, Brazil lived through its golden years. In five years, the country had invented its modernist style.

Elected president in 1956, Juscelino Kubitschek de Oliveira, an elegant man with a broad forehead, brandished a promising slogan: »Fifty years of progress in five years«. He quickly got to work. Not worried about increasing debt, he launched the project for a new federal capital, Brasilia, designed by the communist architect Oscar Niemeyer. Volkswagen opened state-of-the-art factories and created the »fusquinha«, the Beetle. In Rio, the Vespa made its first appearance. The Arpoador Surf Club crew run into the »girl« from Ipanema, Helô Pinheiro - the tanned garota (»chick«), between a flower and mermaid, who at 17 walked by the Veloso bar, where the fiery author and composer, Tom Jobim and Vinicius de Moraes, were getting drunk on whiskey. From then on, bossa symbolized cool. In 1958, Joao Gilberto recorded Chega de Saudade, which the directors of Philips denied, calling it »music for fagots«. The marketing director, who believed in it, secretly pressed 3000 78-inch vinyls and distributed them at schools around Rio, creating a tidal wave. American jazzmen then took over. In particular, trumpeter Dizzy Gillespie and guitarist Charlie Byrd.

In November 1962, the Brazilian Ministry of Foreign Affairs funded a »Bossa-Nova« concert at Carnegie Hall in New York, inviting the genre's pioneers. Unprepared, the show soon turned to disaster. But the troupe was invited to the White House by Jackie Kennedy. The first lady loved »the new beat« and in particular Maria Ninguem, a song by Carlos Lyra, later covered by Brigitte Bardot. In Brazil, the 1964 military coup quickly ended this euphoria. The destructive atmosphere that ensued pushed many Brazilian musicians to leave, if not to exile. Thus, Tom Jobim, Sergio Mendes and Joao Gilberto arrived to the United States. In New York, Joao Gilberto met saxophonist Stan Getz. At the time, he was married to the Bahianese Astrud Weinert Gilberto, who had a German father. She had never sung before, but she knew how to speak English. Getz therefore asked her to replace her husband on The Girl From Ipanema. The Getz/Gilberto record with Tom Jobim on piano, was released in March 1964. Phil Ramone, the »pope of pop« was in charge of sound.

Bossa nova arrived in Paris through the classic »guitar-voice« channel (Pierre Barouh, Baden Powell, Moustaki_) But France loved jazz and Paris had already welcomed its American contributors. All these good people were to pass through Saint-Germain-des-Prés. The cabaret l'Escale became the Mecca of Latin American sound where one could find Pierre Barrouh and his friends, such as the Camara Trio, samba-jazz aces, whose only record was published by the Saravah label. With a band strangely called Les Masques (a band that included Nicole Croisille and Pierre Vassiliu, among others), the Camara Trio recorded an interesting Brazilian Sound, including the track Il faut tenir which is present on this tasty compilation of rarities. Other enlightened musicians can also be found on the compilation, such as Jean-Pierre Sabar (songwriter for Hardy, Auffray, Leforestier ...) and the French pop rock organist Balthazar. In 1975, Sabar recorded Aurinkoinen Musiikkimatka on a Finnish label, which featured the crazy Vai, Vai, included on this record.

We are now following the footsteps of Brazilian electronic musicians such as Sergio Mendes, Eumir Deodato or Marcos Valle who created funk and disco sounds on their keyboards and synthesizers. A style that influenced Véronique Sanson when she wrote Jusqu'à la Tombée de la nuit in 1969 for Isabelle de Funès, the niece of Louis and a great friend of Michel Berger - Sanson did end up singing this track on her 1992 Sans Regret record. The pinnacle of exoticism and travel, Sylvia Fels' Corto Maltese includes bongos, sea mist and ocean sounds. The title was taken from Jacky Chalard's concept album written in 1974, Je suis vivant, mais j'ai peur (I am alive, but I am scared), based on Gilbert Deflez's science fiction novel. However, bossa nova extended the scope of popularity. »In the 1970s, I was a fan of Sergio Mendes, Getz / Gilberto. I fell in love with this music that I knew because I had been an orchestral singer«, explained Isabelle Aubret, who in 1971 delivered a composite record of covers by the very funky Jorge Ben, Orfeu Negro, Tom Jobim, Vinicius de Morais and Jean Ferrat. »I recorded this album for Meys Records in Paris, far from Brazil, with wonderful musicians, François Raubert, Roland Vincent, Alain Goraguer...«. The latter wrote the arrangements for Casa Forte, a very percussive title borrowed from Edu Lobo, one of the initiators of the bossa who spent time in California. »Jazz and bossa came together and produced very rhythmic music. I love singing, it allows me to dream, to have fun, to feel a high on stage, and these songs brought me joy, made me swing, my singing felt like a dance.«

The world tours of French singers and their desire for the tropics, often brought them to Rio with its hills, forests, caipirinhas and tanned bodies. There are surprises though, like this Iemenja (Iemenja is the goddess of the sea in the Afro-Brazilian candomblé religion). Not unlike the composer and musician Jean-Pierre Lang, based in Sao Paulo, Claire Chevalier taught Brazil to Brazil. In 1970, the singer and painter published a 45-inch vinyl, Mon mari et mes amants (My husband and my lovers), under the improbable pseudonym of Clarinha (little Claire). She was then living in Rio, with her husband, Joël Leibovitz, who founded a band called Azimuth, and who owned a record label specialized in »sambas enredos« songs for samba school parades. For its B side, she asked Pierre Perret to come up with lyrics for a song composed by Carlos Imperial: »Oh goddess of the sea, o goddess Iemenja, I bring a white rose to adorn your long hair ...« . »Perret came to see us, and we had fun, remembers Joël Leibovitz. We wrote Lemenja for fun, we recorded it at the Havaí studio, behind the Central do Brasil [ the central station]. Erlon Chaves, the arranger who worked with Elis Regina, joined us« adding his share of Afro-Brazilian percussions and funky brass to the mix.

There is a common misunderstanding in Franco-Brazilian history: that bossa, admittedly hedonistic, is perceived as funny, even though the poets who wrote the texts are often philosophizing on the human condition. Its French interpreters pull it towards a carnival inspired universe, far removed from its fundamental essence. Thus, Jean Constantin covered the famous Samba da minha terra, an ode to the art of samba written by the classic Bahian composer Dorival Caymmi, renaming it with the enticing title of Pas tant de tchi tchi pompon: »On your pier there is no tchi tchi / when you arch your back, you know everything is alright «(lyrics by Gérard Calvi). This expedited bossa aims for the absurd, but retains a certain elegance. Indeed, Jean Constantin was not an idiot, the rather large man had a huge mustache and liked fantasy, (Les pantoufles à papa, Le pacha, inspired by cha-cha-cha-cha, salsa and jazz) but he was also the lyricist of Mon manège à moi interpreted by Edith Piaf, the composer of Mon Truc en plume by Zizi Jeanmaire and the soundtrack of François Truffaut's 400 Blows.

Le Poulpe, published in 1970, from which this bossa is extract, was arranged by Jean-Claude Vannier, an accomplice of Serge Gainsbourg's Melody Nelson. In short: »There is enough of samba / By looking at the parasol / Because my poor cabeza / Is going to die in the sun«. Even the American actress Marpessa Down, who was at the heart of the bossa nova revolution with her role as Euridyce in Marcel Camus' film Orfeu Negro, winner of the 1959 Cannes Palme d'or, fed the clichée with Je voudrais parler au petit cuica - »Tell me how you manage to always make people want to dance / It's true, I must admit that I cannot resist your magic« - in consequence, once can hear the cuica, a little drum inherited from the Bantu. But bossa nova had many angles. Societal, of course, pushing actresses who were symbols of women's liberation like Brigitte Bardot, Jeanne Moreau, or Sophia Loren to engage in the exercise of accelerated bossa.

In February of 1963, Sophia Loren made a record in French in Rome, Je ne t'aime plus, featuring the song De jour en jour, a bossa written by two Italians, Armando Trovajoli and Tino Fornai, which was released a little later by Barclay. Bossa accompanied the 1960s, a decade of moral liberation. Ann Sorel, who interpreted La Poupée des favellas, caused a sensation with L'amour à plusieurs, a provocative song written by Frédéric Bottom and Jean-Claude Vannier. As for the actress Andrea Parisy, she displayed her bourgeois cheekiness in Marcel Carné's Les Tricheurs before interpreting Les mains qui font du bien. And Magalie Noël, the friend of Boris Vian, who sung Johnny fais-moi mal, was hired to sing Une énorme Samba, composed by Alain Goraguer (arranger to Gainsbourg, Bobby Lapointe and Jean Ferrat) with lyrics by Frédéric Botton. But in the end, of what wood is bossa nova made of? The answer is given by Christianne Legrand, daughter of Raymond the conductor, and sister to Michel the composer: »With me, with jà« - jà means »immediately« in Portuguese. In 1972, the singer, an expert in vocal jazz and a member of the Double Six, published Le Brésil de Christianne Legrand. Two songs included on the Tchic Tchic compilation that demonstrate how bossa, jazz, funk, rock, etc. work like a swiss army knife: the music is used to denounce broken systems, or miracles, HLM et ciné roman, Cent mille poissons dans ton filet, two songs from the O Cafona soundtrack, a successful telenovela broadcast, at the time in black and white, on TV Globo. The first was adapted in French by the fighter and friend of the Legrand tribe, Agnès Varda. The second is content with a play on words, jostling them into a summer fun.