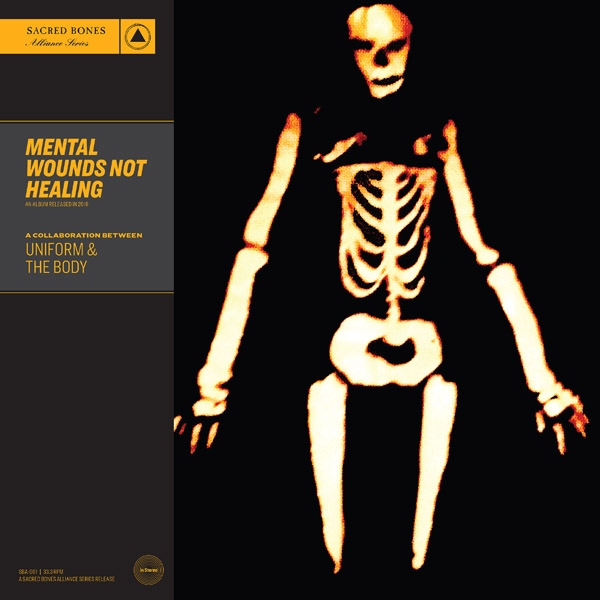 In Spring 2017, UNIFORM was asked to support fellow noisy, boundary-pushing duo THE BODY for a European tour. Having been longtime fans of the band, UNIFORM vocalist Michael Berdan and guitarist Ben Greenberg jumped at the opportunity. During the planning phase of the tour, Berdan and Lee Buford from THE BODY started corresponding regularly. Ultimately, Berdan asked Buford if he and THE BODY cofounder Chip King would be interested in making a collabªorative record with UNIFORM. Buford enthusiastically assented, and the seed of "Mental Wounds Not Healing" was sown. A few months after the genesis of the idea, Berdan and Greenberg went to the legendary underground Providence studio Machines With Magnets, where THE BODY were finishing up work on their latest LP. King and Buford had a ton of cool beats and music ready that Berdan played synth bass lines over. Greenberg then played guitar over Berdan's bass lines, and the songs began to take shape. After the Machine With Magnets session, engineer Seth Manchester sent Greenberg stems of the tracks to work on back in Brooklyn. Berdan recorded vocals in the hallway of Greenberg's tiny apartment, and the raw intensity of that makeshift session served as the perfect counterpoint for King's unmistakable voice. Effectively, every song on "Mental Wounds Not Healing" is a duet between Berdan and King. The collaboration pushes both bands far beyond their roots in industrial music and metal, creating an immersive listening experience that truly transcends genre. The title of the record is a line stolen from the chorus of Ozzy Osbourne's "Crazy Train." Most of the titles are culled from horror literature and cinema, with specific nods to Shirley Jackson, Jack Ketchum, and Elem Klimov. Thematically, the songs have to do with feeling trapped in one's own mind, projecting images over and over again of a future in shambles before it even gets a chance to hapªpen. It is about hopelessness, anxiety, and depression so familiar that they seem like permanent fixtures of one's psyche and identity.

Uniform & The Body
Everything That Dies Someday Comes Back
LP
EUR 21,99*
alle anzeigen