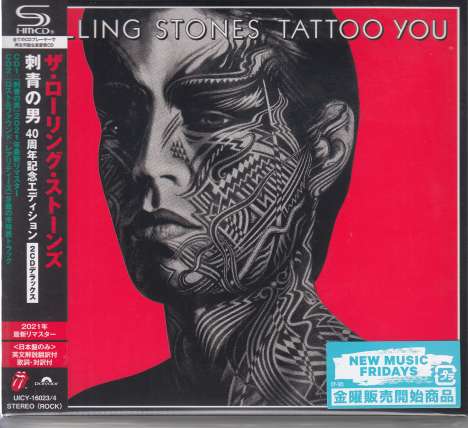 The Rolling Stones' 16th studio album, released in 1981, was composed from old outtakes and unfinished tracks from the 1970s, with new vocals and overdubs. A number one hit in the US at the time, Tattoo You still sounds incredibly fresh 30 years later.

In the summer of 1981, The Rolling Stones were in their 20th year together as a band. These days that’s really nothing special. Nearly everyone stays together, if they’re any good, and sell enough records and concert tickets and merchandise to make it worthwhile - albeit with a few carefully-staged break-ups to maintain some interest.

But in the early 80s, still being together after nearly two decades was a very, very big deal. No one outside of the odd gospel group or some fairly awful cabaret acts had ever managed it. And yet, here was another record by The Stones – just 13 months after the excursion into funk-rock that was Emotional Rescue – and the band were sounding very strong, invigorated and overflowing with fresh potential.

At the time Mick and Keith were going through an uncommunicative stage. (“We'd stopped writing new stuff,” is how Keith described it, although he later went on to add, “It wasn't that we'd stopped writing new stuff, it was a question of time.”) And they needed to get an album out. To try and solve the problem, producer Chris Kimsey spent a few months going through the band’s archive, pulling tracks and ideas from recordings made up to nine years previously.

There was solid gold in the vaults. The sly, shifting menace of Tops, a song with a great, top-of-the-vocal range chorus, dates from a Jamaican Goats Head Soup session with Jimmy Miller producing in November 1972. That’s Mick Taylor on guitar, not Ronnie Wood.

The same sessions also produced Waiting On A Friend, which went on to be a Top 20 hit in America. Mick added the new lyrics – he described them as being, “very gentle and loving, about friendships in the band” – while an accompanying video made with Peter Tosh was hugely popular on MTV, which, like Tattoo You, was ‘released (launched) in August 1981.

Elsewhere on the record, the brilliantly funky Slave – which features jazz legend Sonny Rollins on saxophone and, rumour has it, The Who’s Pete Townshend on backing vocals – was recorded just a few months before the album’s release. What both tracks show – what the whole album shows – was that here was a band so prolific, with such a volcano of ideas, that a whole new record could easily be put together almost entirely from old instrumental pieces with new lyrics and melodies. Then, of course, this being The Rolling Stones, that record would go to Number One in America and kick off enormously successful US and European tours.

The new song that lit the fire under those tours, the piece that sent the message out that this band were as hot as ever, was Start Me Up, a completely iconic slice of Rolling Stones songwriting with a riff as memorable and thrilling as that on Tumbling Dice or Satisfaction. Start Me Up began life in 1975 as a track called Never Stop. Recorded, recorded during the same Munich sessions that produced a lot of the Black And Blue material. Incredible as it seems, this early ‘80s classic, a kind of aural poster child for the first generation of MTV, actually came from a mid-70s jam session, and lay around gathering dust for half a decade before it was released. And 30 odd years later it sounds as fresh and startlingly dynamic as it ever did.

Hang Fire, a brash, punky blast of fury, comes from a long French session that took place over a few months at the beginning of 1978. Heaven, by comparison, is a floating, horizontally relaxed track - a fantastically relaxed, almost introverted piece of work, and the closest the Stones ever come to full-on experimental ambience.

But don’t worry, because this is The Rolling Stones, and Keith Richards’ Little T&A (taken from the Emotional Rescue sessions) is about as far from full-on experimental ambience as it’s possible to get. “The bitch keeps bitching,” he sings, “snitcher keeps snitching, dropping names and telephone numbers and all…” over a punchy, slash-and-burn track that was a direct influence on Primal Scream’s Rocks. And just in case you thought the band didn’t want to do R ‘n’ B anymore, Black Limousine appears sounding like the greatest bar band in the world have just tumbled into the room. The song was a big live favourite for years to come, as was one of the album’s all-new songs, Neighbours.

Despite being pulled from a variety of different times and places, Tattoo You is a both truly great mid-period Stones album - an early 80s classic – and an all-time highlight in a career that, astonishingly, wasn’t yet half-complete. (rollingstones.com)