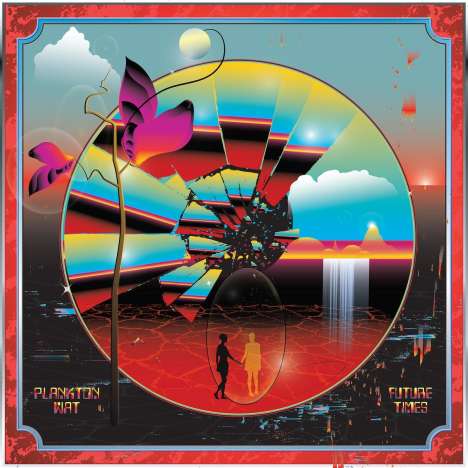 The music of Portland musician Dewey Mahood exists in constant communion with nature. From acclaimed albums with heavy-psych mainstays Eternal Tapestry to his prolific solo excursions, Mahood’s work has always been defined by his restless exploratory spirit and reverence for the environment. As Plankton Wat, his expressionist compositions exude a supernatural grace and patience, reflecting the resplendent beauty and mythical energy of the West Coast’s wild places. Piece blossoms from low-lit, porchside ambience into powerful head-trips, ushering the listener through ravines of feedback and along warm currents of synthesizer drift to peaks of lysergic bliss. Mahood’s masterful and distinct guitarwork consistently blurs the confines of the instrument, at once texturally and melodically rich. Future Times elevates Mahood’s psychedelic instrum entals to new planes. Written to the backdrop of social unrest and climate change fueled fires, Mahood lays out a sprawling cinematic and psychedelic survey of a planet in crisis that weaves a path of hope through the darkness.

Recorded in the Spring of 2020, with most of the United States sheltering in place, Future Times began as a meditation on the times. With the optimism of Spring and the promise of Summer replaced by anxiety about the future, music became an important means of processing difficult emotions and connecting with the outside world. Mahood developed pieces created with musical partner Dustin Dybvig and engineer/producer Victor Nash, transmuting the expansive energy of the live improvisations into lean guitar, bass and keyboards compositions. Pieces were then passed to Dybvig and Nash who fleshed out Mahood’s initial compositions with lustrous layers of synthesiser and subtle studio effects. Future Times transforms Plantkon Wat from a purely solo project into a virtual ensemble, itself a testament to art’s power to transcend physical and social boundaries.

The album’s two elliptical sides trace Mahood’s own inner journey from anxiety to optimism. Side A emerges from the still-glowing embers of west coast wildfires on “The Burning World.” Smoldering synthesizer drones heavy with the scent of burning pine, a vivid portrayal of the artist’s experience of pervasive wildfires, only later to use fire as a symbol of spiritual rebirth. “Nightfall,” a muscular re-work of a long-standing Plankton Wat piece, picks through the ashes to reveal the sombre grace of “Modern Ruins.” Mahood ushers in the album’s aggressive peak on “Dark Cities,” with sharp Casio stabs and sky-clawing guitars, railing at police violence and racial injustice. Even here in the album’s darkest moments Mahood finds hope and respite in the fervor and optimism of protest, fully realised in the serene ambience of conceptual companion piece “Defund The Police”. Title track &ld quo;Futu re Times” is another psychic turning point towards optimism and the title that would come to inform the record’s overall emotive arc. “Wind Mountain,” a Native American sacred place as well as a popular Washington hiking spot near Mahood’s Portland home, provides a space for reflection, a vantage point to look back across the album’s expanse but also out into the future heralded by the closing trumpet blasts.

On Future Times Plankton Wat uses his considerable guitar prowess to deliver songs that encompass both the wild, seeking energy of free-improvisation and the deliberate arrangements of more traditional composition. With his deft and stylistically varied playing Mahood escapes psychedelic tropes and chemical fueled alterations and instead celebrates an escape into the natural world. Future Times taps into psychedelia’s counter-cultural heritage as music for protest, liberation and imagining new ways of being in this world.