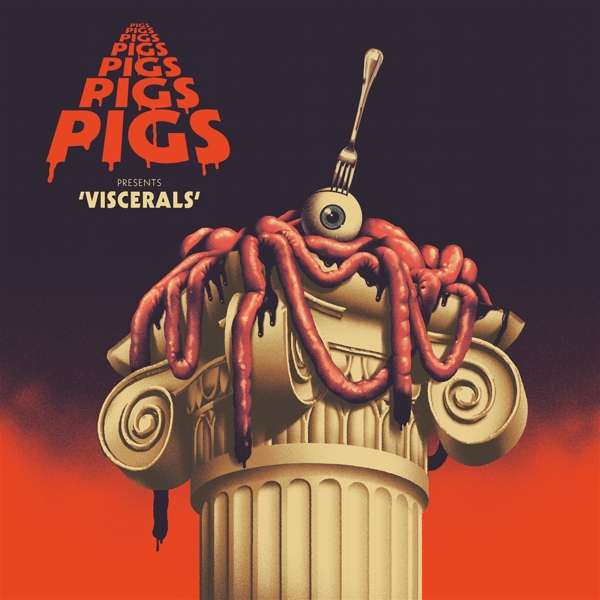 "I learned long ago, never to wrestle with a pig" reasoned George Bernard Shaw. "You get dirty, and besides, the pig likes it." True to form, Pigs Pigs Pigs Pigs Pigs Pigs Pigs have left the wiser of us aware that they are no band to be messed with. This is made manifest on 'Viscerals', their third proper, and an enormous leap forward in confidence, adventure and sheer intensity even from their 2018 breakthrough 'King Of Cowards'. Incisive in its riff-driven attack, infectiously catchy in its songcraft and more intrepid than ever in its experimental approach, 'Viscerals' is the sound of a leaner, more vicious Pigs, and one with their controls set way beyond the pulverising one-riff workouts of their early days.

Yet Pigsx7 have effortlessly broadened their horizons and dealt with all these new avenues without sacrificing one iota of their trademark eccentricity, and the personality of this band has never been stronger, whether on the Sabbathian and philosophical warcry of 'Reducer', the debauched, Jane's Addiction-tinged swagger of 'Rubbernecker', the Melvins vs Sonic Youth demoltion derby of 'New Body' or even the demented MBV-meets-Twisted-Sister party-banger from hell that is 'Crazy In Blood'.

"We're a peculiar bunch of people - a precarious balance of passion, intensity and the absurd" notes vocalist Matt Baty. Such is the unstoppable character of this unique and ever-porcine outfit; still the hungriest animals at the rock trough.