Pax: Pax (May God And Your Will Land You And Your Soul Miles Away From Evil) (Reissue) 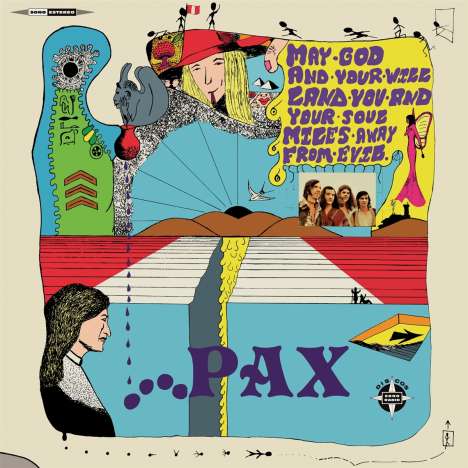 In 1968, Los Shain's magnificent saga of beat, garage and psychedelia came to an end with the dissolution of the band. Pico Ego-Aguirre, the band leader and lead guitarist, embarked on a journey through the hard rock music that made its way to South America courtesy of Vanilla Fudge, Led Zeppelin and Deep Purple, releasing a record with several tracks in this style with his brand-new line-up Los Nuevos Shain's.

The new decade saw young Peruvians exchanging local releases of Cream, Deep Purple, Golden Earring and Iron Butterfly. They weren't alone in being mesmerised by the seventeen-minute-long `In-A-Gadda-Da-Vida' as whenever he could, Alfonso Tealdo, a writer and journalist in his fifties, broadcast the video on television on weekend programming. As soon as the song was announced by Panamericana TV, groups of young people rushed to gather around black and white TV sets before the guitarist Erik Brann had even begun to play the first chord. In those days, Peru was governed by a two-sided military dictatorship.

On one side, it implemented progressive measures to defend popular sectors that had been ignored for decades by the State. But, on the other, it deported detractors of the regime, censored the media and, in the name of combating alienation, expressed strong views against the hippy movement, hitchhiking and psychedelic parties. It was also happy to cancel gigs at the drop of a hat. Amidst the comings and goings of the so-called Peruvian revolution, rock bands latched on tight to sounds that were as harsh as the era they were living through. The elegant beat of Los Jaguar's, Same People, Los Sideral's, Los Benton's and Los Zany's soon made way for the energetic rhythms of Cooking Morning, Elemental Music Group, Catarsis or Los Comandos, who didn't hesitate to cover Led Zeppelin, Vanilla Fudge or Black Sabbath at the psychedelic parties where they played. Pico Ego-Aguirre travelled in a similar direction. An ardent fan of The Beatles in the 60s, in 1971 he decided to look for musicians committed to the idea of following closely in the footsteps of his favourite British hard rock bands. He was after a specific sound, which he accomplished with his next line-up, which would be the group of his music career.

By the end of 1971, Pico, his brother and guitarist Fernando and the vocalist Manolo Montenegro (all former Nuevos Shain's), together with the drummer Ricardo Macedo (ex-Mads) and bass guitarist Carlos "Oso" Torres (former Dr Wheat) were already rehearsing under the name of Pax, but nobody remembers who christened the band. In February 1972 Sono Radio presented them to the press. They started recording the first tracks straight away until disagreements surfaced about song credits. And when "Oso" Torres quit, this exit signalled the end of the group. Pico closed the chapter on this initial line-up and went in search of what would become the classic Pax line-up. Three young Peruvians and a North American, all under the age of 23, put together an album with lyrics in English, vigorous guitar solos, double bass drum set and a record sleeve suffused with symbology, which the future Peruvian heavy metal movement would consider foundational (together with the album by their compatriots Tarkus).

Between 1972 and 1975, Pax promoted the record at festivals, private parties, birthday celebrations, proms and charity events in every neighbourhood of Lima and nearly all regions across the country. In shows that lasted two to three hours, they played their own compositions and cover versions of popular heavy metal songs, attracting fans from all social backgrounds.