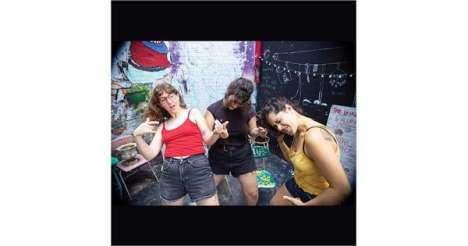 On Palberta5000, Ani Ivry-Block, Lily Konigsberg, and Nina Ryser max out traditional pop forms_blowing the genre out into lush, kinetic extensions_to create their own hardcore style of popular music.

Together these 16 adventurous, hyper-melodic tracks represent the band's most accessible album by far_one that is bursting at the seams with vocal hooks and exuberant playing. Palberta5000 was recorded with Matt Lambozza (PALM, Shimmer), whose Peekskill, New York, studio is located in the original home and family lamp-store of Paul Reuben (Pee Wee Herman). Lambozza's recording and mix capture the band's rollicking instrumentation and vocal precision with greater clarity than anyone has before.

Tracks like the emotionally chaotic "Before I Got Here", which charges hard before turning on a dime into a hypnotic krout-surf outro, convey the panicked feeling of falling in love, while Palberta's ear for pop music makes itself apprent on heart-melting harmonies like those fround on "Corner Store." Adding variation to Palberta5000's well thought-out song cycle are lavish downtempo jams ilke the slow waltz that is "The Way That You Do", and the enchanting "Red Antz".

Taken together, these songs create a full album experience, and one that is sure to excite the band's devoted following while welcoming new fans along for the ride.