The Oiseaux-Tempete & Bunny Tylers: The True History Of The Tortoise & The Hare According To Lord Dunsany (Limited-Edition) 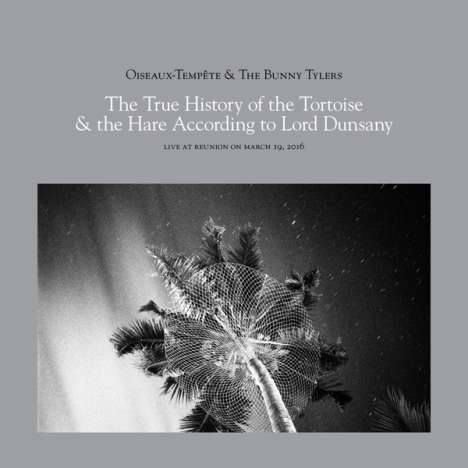 The Bunny Tylers is a duo from Lebanon whose core consists of two prominent musicians from the Beirut scene: singer-songwriter and guitarist Charbel Haber and multi-instrumentalist and producer Fadi Tabbal. Their first two releases, "Glitches & Drones 2013-2016" and "Chance Meetings", were released by Lebanese indie label Ruptured in 2016 and 2018, respectively. The music of French free-rock collective Oiseaux-Tempête is bred from places in turmoil. Embracing the freedom of improvisation, theirs is a secular music that crosses boundaries and cultures, embodying an intersection where post-rock, jazz, Arabic music, punk and experimental electronic music find common ground and refuge. Through their elegiac musical constructions, Oiseaux-Tempête hope to bear witness, to create sense and be a part of the world, obstinately refusing the catastrophe. Rather, they seek to grab hold of the present, cradling it and letting it breathe, breaking through to the obscure "now", creating geographic and temporal bridges. The band's recent album, "Al-`An", was recorded in Beirut in 2016 with a host of local musicians. Toward the end of their stay in the Lebanese capital, Oiseaux-Tempête played a concert with Charbel Haber and Fadi Tabbal from.