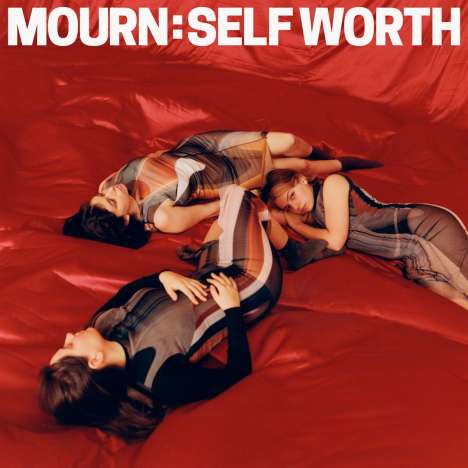 Weitere Ausgaben von Self Worth

MOURN knows quite a bit about setbacks, but a latent belief persists within: the negative will eventually become positive. It's the belief in the wonder of resilience. It's the name they chose for their new album: Self Worth. The band isn't the same as when they formed. The world isn't either. MOURN grew up, and that's evident in the songs that make up Self Worth. Their melodies - energetic and captivating - venture into less level grounds, and their lyrics show a newfound readiness to tackle issues of a different weight and size. "Men" is lyrically patent proof of this growth, and their heightened consciousness as women. A revealing song, necessary and deliberately uncomfortable. A beautiful melody of war against patriarchy; the impulsive rescue of the riot grrrl. Certain needs stand out through the album: leaving behind abusive ties, externalizing the interior noise. "We talked a lot about getting out of toxic situations - not resigning ourselves to that, not enduring that anymore. The songs are like flags to stand up and say: "We are done.'" Just as "Stay There" draws a limit and "Apathy" spits truth in your face, "Call You Back" seems to paint that instance in which love paralyzes, and "I'm In Trouble" turns exasperated voices into machine guns.

Punk assault with a clear message: the body speaks when the mind is not well. MOURN is an enclave of post-teens dealing with the dilemmas of adult life. "This album gave us what we needed: self-worth, the desire to go forward, to love ourselves, with everything, with the good and bad. This album empowers us."