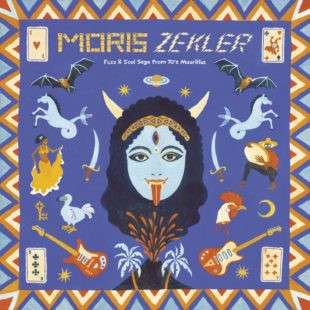 A tax haven and dream destination for wealthy travelers, the Republic of Mauritius is a multi-ethnic country that is currently experiencing full economic and social ascension. Banking, textile, tech, tourism industries_ in this fast-paced melting pot, business is strong. But not too far from the heavenly beaches and luxurious hotels are quasi-shantytowns, reminding us that a large part of the population, often Creole (of Afro-Malagasy origin) are still excluded from the "economic miracle of Mauritius." These Creoles are mostly descendants of slaves who were deported in mass in the eighteenth and nineteenth centuries from Madagascar and the East African coast for the cultivation of spices and coffee and later sugar cane. On the margins of these hellish plantations was secretly created a music called tchiega, chéga or tsiega, a distant cousin of the blues.

The music from Mauritius in the 70s found on this compilation naturally evolved from this original sega. Created at the crossroads of Afro-Malagasy, Western and Indian cultures, pop, soul and funk arrangements, syncopated ternary polyrhythms, saturated guitars, psychedelic organs and Creole vocals, this musical phenomenon is as incredible as a tropical flower in bloom. The Mascarene Archipelago, located in the South Western part of the Indian Ocean includes the islands of Reunion, Mauritius and Rodrigues. Unsullied of human settlement up until 500 years ago, these islands are home to a unique flora and fauna, including the famous dodo, emblem of Mauritius, giant tortoises and the flying fox, a large bat that thrives mostly on raw fruits. Dutch, French and English settlers started trading slaves in Mauritius leading to French King Louis XIV's terrible `code noir' which was finally abolished in 1835. Followed by the era of commitment, often described as disguised slavery during which hundreds of thousands of contract workers immigrated from India and South-East Asia to provide much needed labor in the plantation system for the widespread cultivation of sugar cane. Although the origins of sega remain quite unknown, we do know that it contains vocal and percussive practices that originated from Madagascar, Mozambique and East Africa. A social escape and a space for improvisation, satire and verbal jousting, it transcended everyday life and made room for the expression of conflicts and the transgression of taboos. Inseparable from dance, sega is thus exposed as part of a pair: bodies brush against each other, stare at each other, get excited but never touch each other. The main instrument of sega is the ravanne, a large tambourine-like drum made of a large wooden frame and goat skin. It is accompanied by the maravanne, a rectangular rattle filled with seeds, and also often by a triangle, a bottle, a machete or any metal object that can be hit with a stick.

The practice of sega also exists in a ritual and mystical form, forgotten in Mauritius, but still present in Reunion where it creates impressive trances during the "servis malgas", cults dedicated to ancestors. Songs of sailors, romances from ancient France, Breton folk traditions, and of course the many rhythmic and melodic contributions from India have certainly influenced sega. The fashionable European ballroom dances (quadrille, scottish, waltz, polka, mazurka) were introduced by the bourgeois circles, then appropriated by the Creole populations who used the repertoires and instruments (violins, mandolins, pianos) to create a first fusion of the genre called "sega salon". Jean Alphonse Ravatton also called "Ti Frère" (little brother) is considered to be the "missing link" between the original sega and modernity. Born in Quartier Militaire (Military Quarter) in 1900, he learns sega from his father, a singer and organizer of "bobèche balls" lit by oil lamps and "rann zariko balls" where a bean hidden in a cake determines who will organize the next party. A fabulous improviser, "Ti Frère" sung about impossible loves, marital quarrels, social misery, alcoholism and violence with his hoarse voice. He was the inspiration for future generations of segatiers. His song "Tamassa", pressed on a 78-inch vinyl in rudimentary conditions by the Damoo pressing plant, a pioneer of phonographic production in Mauritius, was his first local recording. Fanfan the sega storyteller, "Captain" Michel Legris, the Cassambo family or the fisherman and healer Nelzir Ventre de Poudre d'Or (golden powder belly) are all singular figures of the "typical" sega who preserved the Afro-Malagasy cultural heritage and influenced modern sega.

Now celebrated as an emblem of Mauritius, sega long remained disdained and banned in its early days by the colonial administration who feared revolts and slave gatherings. The high society then despised this music of "dark tcholos", calling it grotesque, rowdy and repetitive, while the Catholic missionaries denounced the sega dance, considering it to be licentious and depraved. It is only from the 50s onward that the style came out of the shadows. The Mauritian soldiers who fought alongside the English in the Second World War brought along guitars, banjos and accordions. The first orchestral ensembles such as the Typhoon Band, the Police Orchestra or the Pepitos took over fairs and movie theaters. A generation of popular singers emerged with Roger Augustin, Jacques Cantin, France Jemon, Francis Salomon and the famous Serge Lebrasse, who had much to do with the democratization of sega thanks to the enormous success of his first song "Madame Eugene" in 1959. The single was produced by John Venpin on "Dragons", a small label that put a mark on the 60s and 70s with its continuous production of 45-inch vinyls, following in the footsteps of Michel Foo Fat's `Neptune' and Henri Ah Koon's `Do Re Mi', other pressing houses run by Chinese merchants. The emerging tourism industry approached sega as an added value and a guarantee of authenticity. The orchestras started playing their segas in hotels among all kinds of other musical varieties and international hits. This was also around the time of the creation of Mauritian TV and sega programs such as the "Star Show" presented by the excellent keyboard player Gerard Cimiotti, who launched many singers' careers. Cimiotti is part of a handful of genius arrangers who, over the course of two decades, propelled sega. The most prolific and surprising of them is undoubtedly Marclaine Antoine, a talented self-taught guitarist and multi-instrumentalist, producer and arranger who composed hundreds of singles for a number of singers: "They would come see me with a song composed of two or three chords on the ravanne" he remembers "I would offer arrangements that we would record with my orchestra, often just voice, bass, rhythm guitar and drums because we only had a 4-track recorder at the time. I would then go to Reunion to re-record the tracks with percussion, chorus, guitar solos, keyboards etc... The records were then pressed in Madagascar at De Comarmond". In 1959, Raoul De Comarmond and his son Jean-François had set up the first 78-inch pressing plant in the Indian Ocean in wild conditions.

In addition to funding many labels and pressing most of the singles from Reunion, Mauritius, and Madagascar in the 60s, they went on to produce nearly 5000 references over 20 years. The singer Claudio Veeraragoo, after debuting in the styles of variety and bollywood, became the first Indian-born segatier but also one of the pioneers of rock sounds and saturated guitars in Mauritius. A fan of Santana, Jimmy Hendrix and the Shadows, he recorded the incredible "Qui Fine Arrivé" in 1971, a sorrowful love song melded with a canvas of sharp riffs played by James Furcy. The band was called "les Copains" before becoming "Satanik" or the "Satanik Group". Claudio made a strong impact with his segas inspired by Bollywood and Qawwali, then with his hit "Ambalaba" covered by Le Forestier, which made him internationally known as one of the biggest stars in Mauritius. In his famous session from 1971, Harold Berty, another singer of Indian origin, recorded his first 45" from which came the song "Django", an ode to the famous pistolero from the eponymous western spaghetti. "Mo'nn tir sa kou revolver ek mo labouss" he recalls: the effect of the pistol and the whistling bullet is simulated by his own voice. Another iconic figure, the segatier from Rose-Hill, Jean-Claude Gaspard son of Roger Augustin started out playing guitar for the Yankees, Serge Lebrasse's orchestra, before becoming one of the most famous singers from the Indian Ocean with a local and international career that spanned over 40 years. A prolific composer and a talented chronicler of everyday life, he is known for his humorous two-sided sega. Puns, irony and sexual allusions are all an integral part of the style. A specialist of this aspect, the singer Coulouce (Jean Pierre Mohabeer) was censored by the Mauritian radio before sinking into alcoholism and dying, like many artists of his generation, in misery and indifference.

A few months after the independence of 1968, a gang war began in Port Louis, drifting into violent racial riots. Followed by the birth of the MMM (Mouvement Militant Mauricien) which, inspired by Frantz Fanon and May 68, offered to replace race struggle by class struggle. This marks the beginning of the years of embers, 10 years of strikes, police repression, student revolts and states of emergency. This was a decade of profound cultural change revealing the turbulent multiethnic Mauritian identity. The emblematic movement of the "santeé engazé", which mixed Indian music, sega and progressive militancy, appeared with Siven Chinien, Grup Latanier and the Soley Ruz band which brought together Bam Cuttayen, Rosemay Nelson, Micheline Virahsawmy, Nitish and Ram Joganah, Lélou Menwar and Eric Nelson. The latter, a solo guitarist and arranger, set up the "Features Of Life" which, in the mid 70's, gave birth to a new sound. Fuzzy distorted guitars and funky beats invite each other to play over the unbridled ternary beats created by fabulous drummer Raoul Lacariate, brother of singers Micheline Virahsawmy and Rosemay Nelson, a cursed genius who tragically vanished way to early. The band accompanied a new wave of singers, including the atypical Joseph Roland Fatime aka Ti L'Afrique, a hyperbolic and hyperactive character, a fan of blues and James Brown who launched an explosive raw, and funky style of sega. Originally from Plaine Verte, an Arab neighborhood of Port Louis and born in a family of kawwal singers, he became a segatier, political activist, masseur in hotels, host at Club Med, and even a pastor and sports coach! During the 70's, his bad boy reputation preceded him. Now a repentant, he leads peaceful days in the suburbs of Port Louis. In his wake is Joss Henri, who played guitar in the Caméléons alongside Alain Peters, Daniel Delord ambassador of Seychellois music in Mauritius and the excellent Georges Gabriel. Eric Nelson's brother, John Kenneth, stands out as one of the island's most original voices, with his energetic and abrasive style. His song Missieé Coutou, unsuccessfully covered by French singer Carlos, was a hit in the Indian Ocean. Although less known, his first single reissued on this comp is equally brilliant.

With the arrival of cassette tapes, the 80s marked the death of vinyl: many record companies went bankrupt when faced by cassette copies that flooded the market. The role of arrangers who directed bands and supervised recordings disappeared. Speaker systems and DJs replaced the bands that provided entertainment for balls and weddings, confining them to hotels and official ceremonies. Sega underwent a stylistic and melodic impoverishment, accentuated with the advent of computers and the standardization of productions. The style of seggae, a mix of reggae and sega emerged with Joseph Reginald Topize aka Kaya, whose death in jail in troubling circumstances in February 1999 caused historic riots and several deaths. The percussionist and singer Stéphano Honoré, better known as Lélou Ménwar, started out alongside Marclaine Antoine one of the major creators of seggae, then went on to develop his own style, the sagaï, influenced by sega typik, maloya from Reunion, blues and funk. To this day, he remains one of the most surprising artists of the 90s and 2000s. One of the few who has managed to transform the sega saga into an ever more personal and original direction.