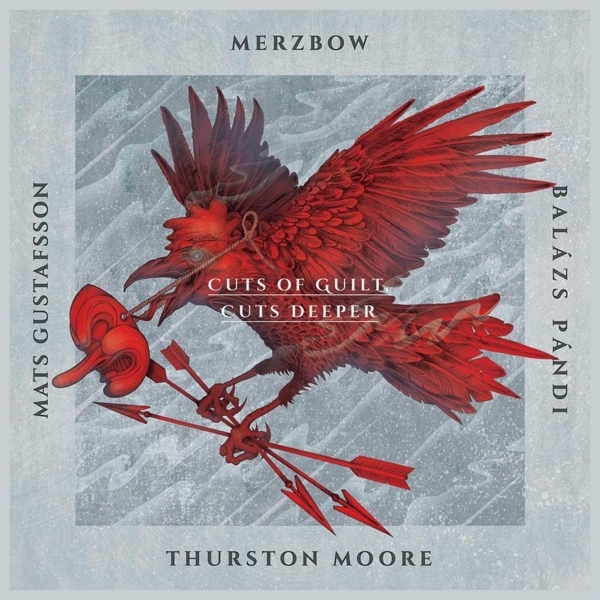 How did renowned Japanese noisemaker Merzbow (aka Masami Akita), Swedish saxophonist Mats Gustafsson and Hungarian drummer Balazs Pandi follow up their majorly intense statement made on their tumultuous debut album, Cuts, which was released in 2013. By adding another ingredient to the volatile mix, in the person of skronking guitar hero and Sonic Youth founder Thurston Moore they've taken things up a notch or two on the Richter scale on their RareNoise Records follow-up recording. With Gustaffson's roaring baritone sax blending with Moore's shriekback guitar, Pandi's intensely throbbing beats and Merzbow's subversive white noise barrages, it all adds up to a sonic pummelling of epic proportions on the remarkable two CD-set, Cuts of Guilt, Cuts Deeper For Cuts of Guilt, Cuts Deeper, the four kindred spirits went into the studio and came up with four extended tracks.

CD 1 is comprised of the 20-minute »replaced by shame, only two left« and the 18- minute »divided by steel, falling gracefully.«

CD 2 contains the dynamic 21-minute jam »too late, too sharp – it is over« and the extreme anthem »all his teeth in hand, asking her once more.« Drummer Pandi calls it mystery in sound.' As saxophonist Gustafsson said of their purely improvised session, »We had no game plan. That usually does not work so well. It all depends on the day, the energy and of course the room. And oh boy, that room was freakin' spectacular! It actually had a skateboard ramp! It was a truly spectacular recording. It went super-fast – just a wall of noise-poetry with layers and perspectives changing all the time. And to have Thurston Moore in the mix just added colours,layers, energies and sound. It was a very inspired sharing with the others.« Pandi provides a bit of history on the evolution of this Cuts quartet. »There is a legendary Roskilde live recording of Sonic Youth with Mats and Masami called ☺ndre Sider Af Sonic Youth' and as a combination of that record and my longstanding duo with Masami, the idea came to try and play a quartet. Those were the days of the last couple Sonic Youth shows in South America, around 2012. Following that, Masami, Mats and I continued to work as a trio. Meanwhile, in 2013 I got invited to join Porn for a string of gigs. Porn masterminded by Tim Moss and Bill Gould from Faith No More and for the London shows Thurston joined us on stage - it was great fun to play together. When we hung out backstage, we were talking about trying to hook up a quartet session sometime with Mats and Masami again. We already had a gig planned with the trio in London, where Thurston currently lives, so we figured the only day he is spending around that time in London is the one we had for recording the follow album up to Cuts. So he was on board immediately.«