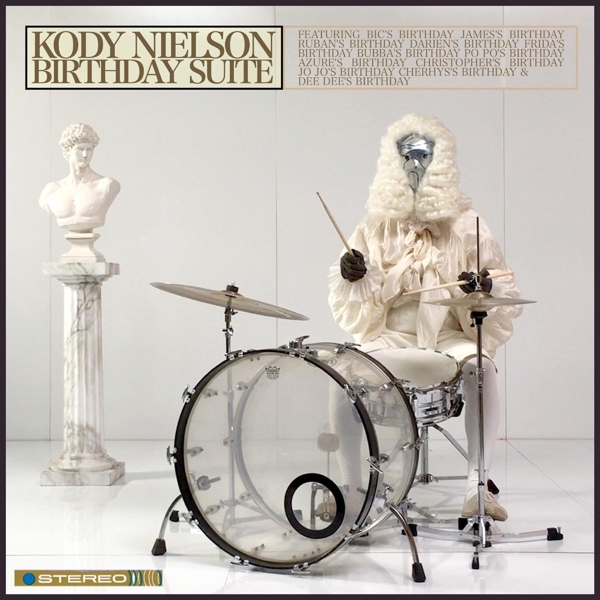 Since the group's disbanding in 2010, his solo project Silicon has been praised by the likes of Pharrell Williams and Justin Timberlake, as well as winning the prestigious Taite Music Prize for the 2016 album Personal Computer. Alongside his work with Bic Runga and their group Opossom, Kody has been an integral collaborator in brother Ruban's project Unknown Mortal Orchestra, and is presently touring with UMO as drummer. Now, Nielson returns with Birthday Suite, notably the first full-length to be released under his own name. Set for release via Flying Nun Records, this auspicious release date marks Kody's own birthday; with each of the record's 12 songs written for one of the artist's family and friend's birthday.

Birthday Suite's instrumental concept also sees each single on the album unveiled to coincide with the namesakes on birthday. Birthday Suite is an energetic, elaborate set of instrumental arrangements comprised of drums, bass guitar, strings, electric piano and synthesizer. A concise and challenging experimentation, Birthday Suite takes ques from everything from the baroque to Afrobeat, Jazz Fusion, Psychedelic Rock and offbeat explorational sounds while maintaining a commitment to classic songcraft and musicianship.

First single Bic's Birthday – sees baroque melodies skating with graceful aplomb over funky drum beats, calling to mind Wendy Carlos or CAN, while second single Ruban's Birthday is a short, sharp composition melding psychedelic string arrangements with swirling drums and organ. His constant ability to agitate and explore his own boundaries, has seen Nielson cement his position as one of the most urgent and interesting characters in New Zealand's music history.