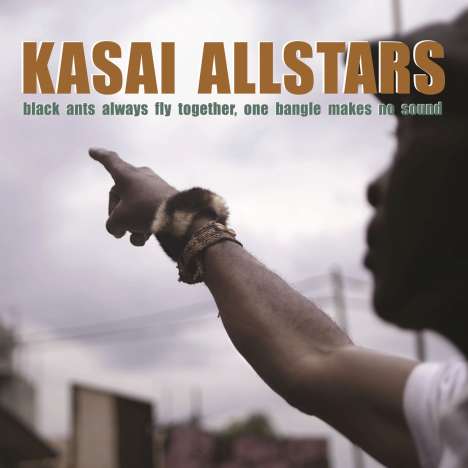 This 4th full-length album by the legendary Congolese collective marks a new milestone in their already rich history, as the band have incorporated their own approach to electronic music into their new compositions. The album was produced by guitarist Mopero Mupemba, who also wrote about half of the songs. Mopero also took care of the often intricate programming, which is perfectly adapted to Kasai Allstars' peculiar rhythmic patterns drawn from traditional trance and ritual music.

The album features Kasai Allstars mainstays such as vocalist Muambuyi (whose voice and personality inspired the making of multi-awarded feature film Félicité), vocalist and electric likembe player Kabongo, powerful singer Mi Amor, and instrumentalists Tandjolo and Bayila. Wonderful young vocalist Bijou makes a notable first appearance on several tracks. As is well-known by now, Kasai Allstars was born from the reunion of five bands, all from the Kasai region, but originating from five different ethnic groups whose diverse musical traditions were thought to be incompatible until these musicians decided to pool their resources and work together, an inspiring example of collaboration transcending ethnic and language barriers.

Ever since the debut release in 2008, Kasai Allstars' music struck the imagination of music lovers and artists worldwide. They're particularly admired by avant-indie rock, electronic & hip hop musicians and media, who consider it as a kind of "primal rock", an accidental blend of trance and avant-garde. They're admired by artists such as Saul Williams, Questlove and Björk, have engaged in live collaborations with Deerhoof, Juana Molina and Konono Nd1, and have had their tracks remixed by the likes of Animal Collective, Deerhoof, Aksak Maboul, Jolie Holland, Shackleton and more.