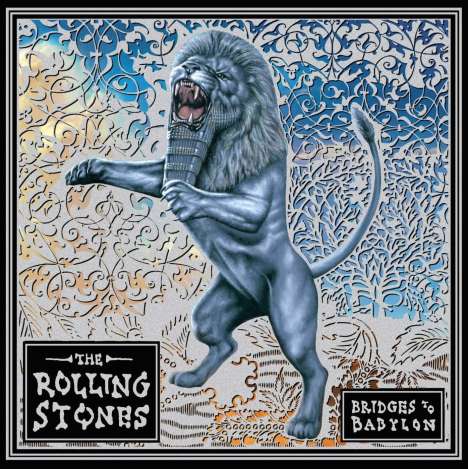 The Rolling Stones' 21st studio album was recorded in Los Angeles in the first half of 1997. Here it's clear that the band and their stellar production team had taken contemporary musical developments on board and decided the best, most positive thing to do would be to get stuck right in.

The Rolling Stones get things done. Their work ethic is as remarkable as it is admirable. They could have long, long, long since decided not to bother making any new music – plenty of others have – and simply tour off the considerable fumes provided by their incredible back catalogue. But they don’t. “We ain’t the Beach Boys,” Keith said in late 1997. “We’re not some nostalgia band…”

Clearly not. Bridges To Babylon was The Rolling Stones' last album of the 90’, their 21st studio recording, and it would be their last record for eight years. If you can say such a thing, it is a Mick record, where Voodoo Lounge was a Keith record. Bridges To Babylon took a look at the musical world that surrounded it and decided to wade straight in.

With overall production duties falling once again to Don Was, the album also featured contributions from specialist production team the Dust Brothers – famous for their work with the Beastie Boys and Beck – and Danny Saber, whose work with Madonna, Bowie and U2 is widely admired. Consequently, there were, for the first and probably last time, samples and drum loops dropped into Rolling Stones’ tracks.

“It’s full of fance,” Keith said at the album’s launch. “That’s funk and dance put together.” Ronnie compared it to Beggars Banquet or Let It Bleed, which was fighting talk, but surely from the heart.

The album began life in January 1997 with the trio of Mick, Keith and Charlie demoing material in New York. In March the band – plus the drop-in services of a fairly large retinue of other musicians, including Jim Keltner, Me’Shell Ndegeocello and jazzman Wayne Shorter – moved to Los Angeles where they began the official recording. Early tracks like I’m Cured and a much-updated Young Love (the Ric Cartey and Carole Joyner song the band first recorded in 1964) came to nothing, but a rich seam of others began to come on stream.

The album opens in a typically Stonesy ballsy way with Flip The Switch, a ode to getting out on the road and chasing up some fun that features the timeless couplet, “I had the turkey, and the stuffing too, I even saved a little bit for you…”

Keith described it as being, “the fastest track the Stones have ever cut. It even beats Rip This Joint…” It was soon right up near the front of the live set.

Anybody Seen My Baby? featured a sample of rapper Biz Markie, a synthesized bass-line and a delicately picked guitar figure from Keith, it is a markedly 90s pop record and there’s nothing wrong with that. kd lang gets a writing credit due to the chorus’s unintentional similarity to her own Constant Craving, which, bearing in mind what a popular melody that is, might have been unnecessary.

Low Down begins with a classic Keith and Ronnie tussle while Mick’a vocal is one of the best on the record, seriously controlled aggression all backed up with a cool soul choir. Mick’s lyrics for the single Saint Of Me considered the people through history who had converted to Christianity – people like St Paul and St Augustine – while admitting that he himself would never be a saint.

And you’re right, that guitar doesn’t sound like Keith. It is, in fact, session legend Waddy Wachtel appearing in his place.

Sugarhill Gang and Living Colour bass-player Doug Wimbish played most of the bass-lines on the record, but he turned down the opportunity to join the band for the huge world tour that followed the LP’s release. Perhaps if he had know that Keith was taking a mobile studio-cum-adults-only-playpen called The Baboon Cage on the road with him, Wimbish might have changed his mind.

Keith sings three numbers. How Can I Stop is a gorgeous ballad sung in a deliciously cut-glass manner that Keith compared to lush old soul like Chi-Lites and Stylistics, You Don’t Have To Mean It has a rock-steady shuffle that cooks down into some suitably pie-eyed dub while Thief In The Night is a hymn-like, soft bluesy moan of a song undercut with a backwards hi-hat.

Rather more aggressive is the funky strut of Mick’s Gunface which tells the story of a man intent on killing his girlfriend’s lover, while Too Tight is a plea for a little more room on the relationship leash. On one of the record’s finest put-down verses he sings, “Don’t try to reel me in, with all those charm school looks, I’ve seen it all a thousand times, I sung that song, I wrote that fucking book…”

Might As Well Get Juiced is the most overtly electronic track on the record, a rumbling country blues run through the Dust Brothers’ myriad sound FX boxes and stretched across a few creaking analogue synthesizers. Keith said he thought they “ruined” the song, which seems a bit harsh, it certainly has more than a bit of heady charm to it.

But then, as Mick said at the time, “Keith doesn’t get along with people very often. In fact, he takes a stand against people…”

The album arrived to mixed reviews, but the band powered into 1998 with the Bridges To Babylon tour. It grossed $250m from 108 shows in 74 cities. In case anyone was wondering, there really was a lot of life left in this band. (rollingstones.com)