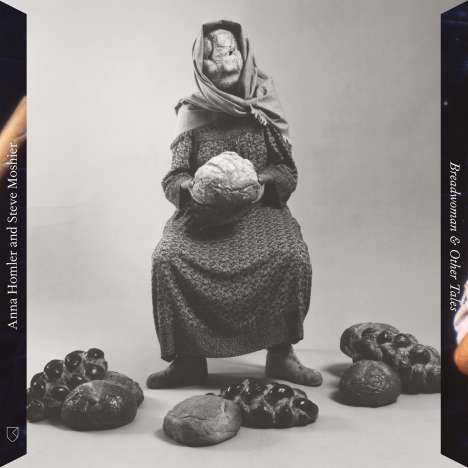 Breadwoman & Other Tales are the collected recordings of a language arising. It is the sound and document of Anna Homler divining speech, lyrical fragments, and melody for music composed, mixed, and engineered by Steve Moshier. It's 1982 and Anna is driving an ocean blue classic Cadillac to meet renowned poet and playwright Deena Metzger in Topanga Canyon, Los Angeles. Passing a non- descript desert patch where tall wheat and mustard flowers grow, Anna opens her mouth and sings in a salient stream of rhythmic, melodic sound. Breadwoman is born, but not by immaculate conception.
For Homler, performance art had recently become »a form big enough to contain everything happening« during her studies with Rachel Rosenthal at Otis College of Art and Design. As this performative freedom fed into the enchanted vocalese, the character of Breadwoman emerged. Homler tread the same multi-disciplinary waters where Steve Moshier and the Cartesian Reunion Memorial Orchestra (CRMO), a communal avant-garde urban chamber music ensemble formed in LA in 1979, floated. When their currents connected, it was clear Homler and Moshier were kin, crossing genres through intensely physical de-significations of music: quasi-theatrical, fully mythic, ritualistic performances. Instead of confining Anna as »a vocalist«, Moshier recognized Anna's voice as a sonic element. To accomplish the recordings of this collection, Moshier chose the least song-like material from Homler's handheld cassette transcriptions and composed music considerately. Anna would then record chants and song variations which Steve would tweak for final touches through his arsenal of analog equipment. Although Breadwoman stands outside of time, she is is rich in the ingredients of 1980s Los Angeles performance art, renegade DIY punk, gallery culture, galvanized jazz, underground cassette-trading culture, drag extravaganzas, and esoteric meaning-making mysticism. Breadwoman is a storyteller – she's so very old she's turned into bread. Breadwoman says: If you don't try to understand, you will. She is the voice, and the voice is cosmic reality's musicality. Through Breadwoman & Other Tales, we hear material meet mythos.