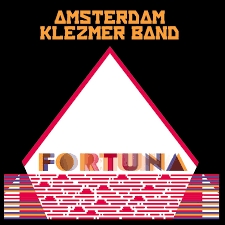 A raw edge, exciting layers and genuine joy in music making: On the new album Fortuna producer Stefan Schmid opens up the seasoned Amsterdam Klezmer band. Schmid: »In fact it's all about Brotherhood. This band's been going for almost a quarter century. A good deal of Gotspe combined with typical Amsterdam boldness, That's Amsterdam Klezmer Band (AKB) in a nutshell«. For the very first time in history AKB, charmed by a proposal to break reciprocal patterns amongst band members and to step out of their comfort zone, invited a producer. Stefan Schmid was granted the job and put his mark on Fortuna. We can't wait to finally share the result, which will be out soon! Schmid: »In the process I tried to emphasise the positive sides of joining forces«. He gave every band member an assignment to write a piece for another band member. This way they were playfully forced to honestly consider each other again. It came out well. »You really recognize the person in the song.«

Right before the studio recordings were about to start the band had to deal with the unfortunate situation that accordion player Theo van Tol had to drop out because of health complications. Ellen van Vliet, who plays with great power and strong timing, became his substitute and saved the day. Over the last 20 years AKB released 15 albums while performing all over the world. The collaboration with Stefan Schmid has been a new and refreshing experience for the band and through this, Fortuna has become a unique AKB Album with it's added subtle, disorderly elements as well as rhythmical production components. So is it still Klezmer we're dealing with? Damn right it is... The sound of Klezmer Music has developed and changed throughout time and we see no reason to put this fact on hold. We'll be exploring new horizons of klezmer and balkan music while keeping the party spirit high. The AKB stands for Klezmer now and into the future!