The Ventures: In The Vaults

The Ventures
In The Vaults
CD
CD (Compact Disc) 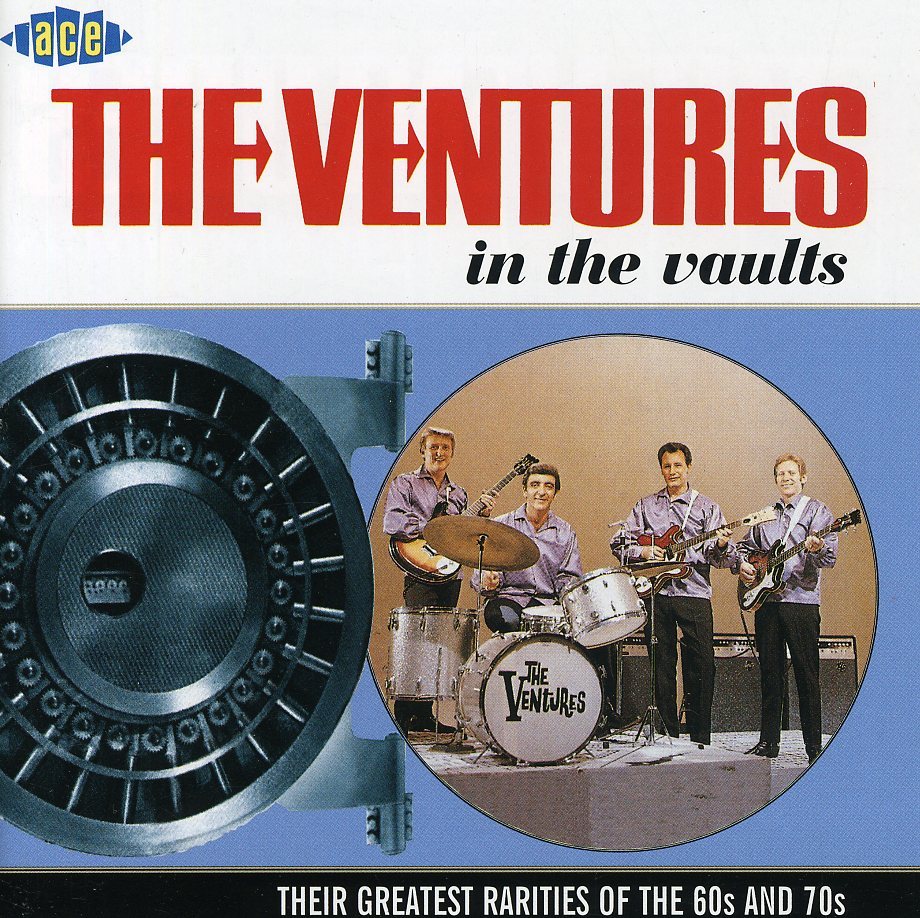 Weitere Ausgaben von In The Vaults

Record collectors of a certain age will vividly recall the cold clutch of fear that welled up as each fresh wave of atmospherics threatened to drown out forever the identity of that wonderful new 45 in a sea of crackle and hiss. Such was Radio Luxembourg in the early 1960s. Luckily my prayers were answered and I just managed to catch Lullaby Of The Leaves by The Ventures. I was already passionately into music and in those days could recite the complete top 20 on a weekly basis. My heroes in the 1950s had been Lonnie Donegan, Buddy Holly, Duane Eddy and, in the succeeding three decades, many others would come and go. Yet none would bite as deeply, nor endure for as long, as the Ventures. The Ventures, of course, were part of a burgeoning genre then simply known as "instrumentals". It had already dawned on me that the part of any record I enjoyed most was the middle break. Singers might produce an exciting song or performance, but it was always the instrumental solo which threatened to break free into the realm of wild abandonment that seemed to lay just beyond. What then could be better than a vocal-less record? In England the Shadows led the way, but in America it was the tougher-sounding Ventures who had it all sewn up. They had a seemingly inexhaustible supply of good tunes and a gift for clever arrangements that would act as a do-it-yourself template for the booming number of aspiring guitarists and drummers. Sadly, because history too often becomes condensed into an easily remembered doctrine, many of today's mainstream rock critics simply do not realise just how influential and pioneering the Ventures really were in their early years. They were amongst the first to seize on new technological advances such as the fuzz box, and were quick to employ any new effect that could add a little extra pizzazz to a track. In 1963 the Ventures produced their "In Space" album. Full of unworldly sounds and bizarre effects, it placed the band firmly at the then cutting-edge of rock. Much of their work during '64 and '65 merged the reverbed sound of surf guitars with wailing organ and gloriously fuzzed-up guitars, creating some of the heaviest sounds around at that time. In fact many of the psychedelic groups that emerged slightly later sometimes sounded suspiciously like the Ventures- with the addition of a vocalist and a few magic mushrooms of course! Today the Ventures- now in their sixties - continue to record, as well as tour and play in America and Japan. British fans are praying for their first UK visit. Never a band to court fashion, they may have fallen out of general popularity but still manage to retain a substantial hardcore following. Thankfully their star has remained high within the rock'n'roll fraternity and has lost none of their appeal to young rock musicians. It seems they are still heroes. Isn't that where we came in? Ace are to be warmly congratulated for releasing the first official CD of the Ventures' rarities.