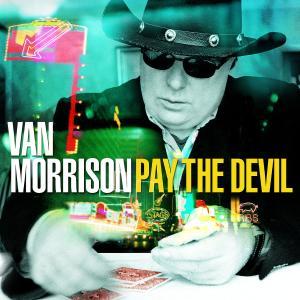 Now with Morrison’s latest album Pay The Devil, that good reason has resulted in a great new album. From the start, the deeply soulful sounds of the American South helped inspire Morrison to one of the most enduring and consistently impressive careers in music history. For forty-years, he’s drawn upon the greats of Rhythm & Blues to create his own distinctive and influential blend of soul and Celtic influences. On Pay The Devil, Morrison explores his inner cowboy more than ever before -- recording a compelling mix of his favorite country compositions as well as a few equally strong originals that more than earn their place among such distinguished company. Morrison has taken some enduring, endlessly relevant songs of the south and somehow made them all his own.

Those who have been following Van Morrison for years might praise him for his remarkable range in taking this turn down a country road. Recent years have seen Morrison cover the musical waterfront with recordings that touch upon traditional Irish music, jazz, skiffle and other musical forms that move him. But the secret of Morrison’s ongoing artistic success is that he has never followed fashion in the slightest. Rather he continues to be a working musician who simply follows his own soulful muse wherever it may lead him. This dogged individuality has been true of Van Morrison straight down the line – from his days leading the Irish group Them back in the Sixties, to his early solo days of “Brown Eye Girl” and “T. B. Sheets” to such late Sixties and Seventies masterpieces as Astral Weeks (1968), Moondance (1970) and Tupelo Honey (1971) to more recent classic albums like Irish Heartbeat (Morrison’s stunning 1988 collaboration with the Chieftains), Avalon Sunset (1989), Enlightenment (1990), The Healing Game (1997) and Magic Time (2005).

The outstanding, plainspoken songs on Pay The Devil range from the familiar, like Morrison’s impressive take on Hank Williams’ “Your Cheating Heart” and Webb Pierce’s “There Stands The Glass” to somewhat less familiar Country & Western gems. It is a true tribute to Morrison’s genius as a vocal stylist that he can take a song as often covered as “Half As Much” -- recorded over the years by everyone from Hank Williams to Patsy Cline and Emmylou Harris – and manage to make it feel new all over again. He does so by clearly connecting with country’s timeless themes of love and loss and life, sin and salvation. Through it all, Morrison proves to be one hell of a fine, subtle straight-ahead country singer in the grand tradition of George Jones. Indeed, one of Pay The Devil’s many highlights is Morrison’s take on “Things Have Gone To Pieces,” a dark gem written by Leon Payne that Jones made famous. Then there’s “What Am I Living For?” -- an old Chuck Willis number. Listen to how Morrison delivers Rodney Crowell’s early masterpiece “Til I Gain Control Again” -- one of the more recent copyrights included here and a standout effort on an album full of them.

Yet even among such high standards, Morrison’s originals here are among the highlights – including “Playhouse” a sly, infectious song that one wishes the Genius of Soul had lived to record, and the title track – a reflection on making the devil’s music and a fine reminder that “one man’s meat is another man’s poison”.

To listen to Pay The Devil, one might naturally assume that Morrison has traveled to Nashville and handed himself over to Music City’s finest players and producers. Remarkably, Morrison has done nothing of the sort – recording Pay The Devil in Ireland with the same wonderful musicians who have been playing with him for years now with exceptional results. Even more remarkably, it turns out that Morrison has never even been to Nashville before. Regardless of that, he has made a classic album that sounds like Nashville at its finest and stands as tall as anything that’s come out of the town in recent years. Pay The Devil is not just great country music, it’s great music – whatever country you happen to come from. We’ve come to expect no less from Morrison.