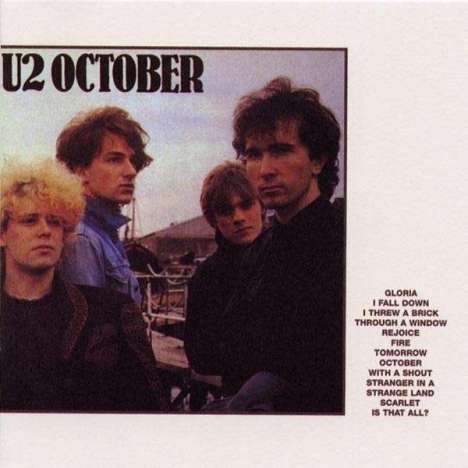 October, originally with the working title of Scarlet, was released in the summer of 1981. In several countries, October was re-issued on 5" CD in March 1996 as part of the Island Master series. This Island Masters re-issue featured higher quality paper and extra pictures from the original LP's inner sleeve. However, a different back cover featured a black and white photograph of the band instead of the photo of the docks in Dublin from the original version of October. In Argentina, a promotional copy of October was released with the title Is That All?, title of the last track on the album. The album peaked at No. 11 on the UK album charts during its first week of release. Conversely, it never cracked the Top 100 on the US album charts and didn't rise higher than No. 104 where it was certified platinum by the RIAA. UK magazine New Musical Express voted the album No. 4 in its annual poll. (U2.com)

'October was the most dificult of the three three records I did with them basically because of the well-chronicled story of Bono losing his lyrics during the American tour. The fact that the first album had a bit of success in America meant that the band toured over there for a long time to do the groundwork. When they came back and it was time to do the second album, nothing was ready! 'Steve Lillywhite in Propaganda 5