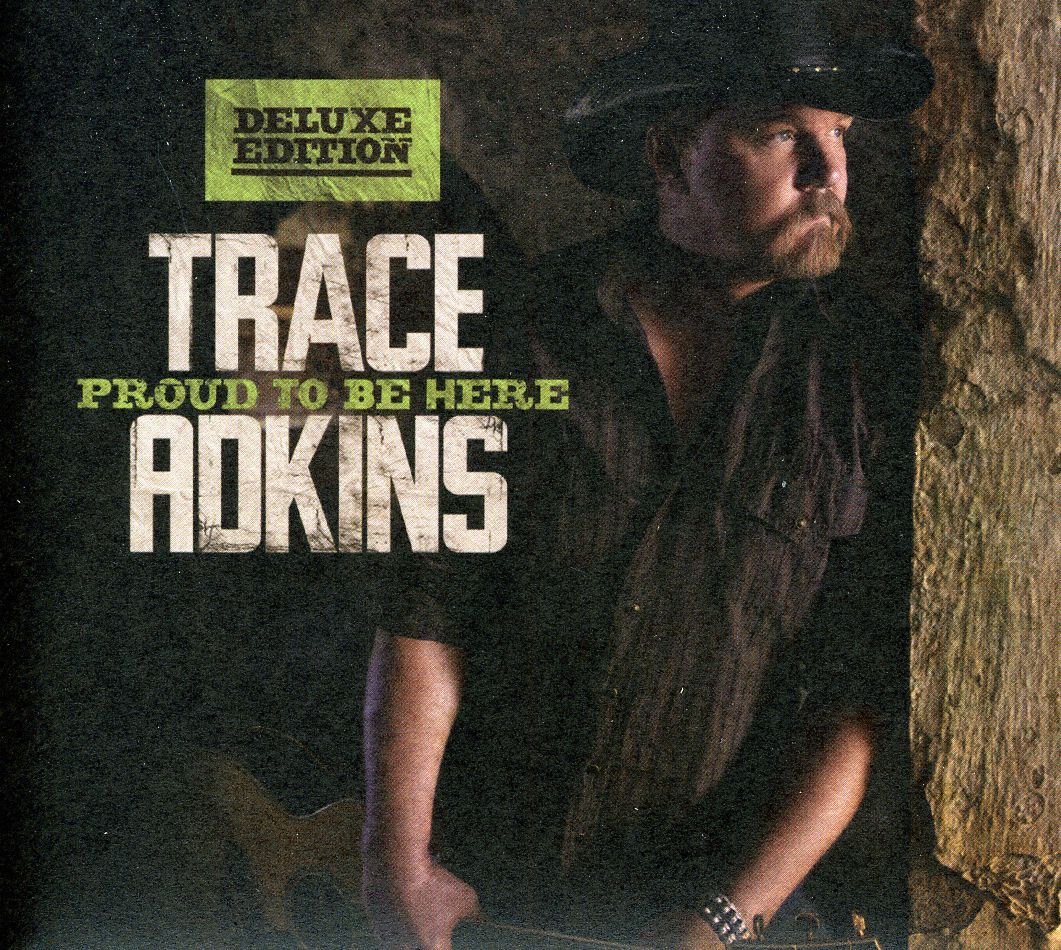 -20%
Trace Adkins
X
EUR 14,99**
CD
EUR 11,99*
* Digipack
"Proud To Be Here was chosen as the album title some weeks ago because it's how I've felt ever since my first album release and during every milestone since. The title song could have been based on my life and it's about narrow escapes and the grace that guides you through. Obviously, now after the fire, Proud To Be Here takes on an even greater significance. Once again, I've been blessed and everyone is safe. I don't even want to think what could've been had it started at 3am instead of 3pm..." said Trace.

Recorded in the Spring of 2011 and dubbed PROUD TO BE HERE last May, the album was produced by Kenny Beard and Mark Wright. The album contains 10 tracks with an additional 4 tracks appearing on the Deluxe Edition. The Deluxe Edition includes Trace and Blake Shelton (courtesy of Warner Bros. Records) on a hilarious response song called “If I Was a Woman,” co-written by Trace Adkins, Sherrie Austin, Jeff Bates and Kenny Beard.

Trace’s own co-writing is more prominent on PROUD TO BE HERE than on previous releases – a fact he attributes to the creative environment he has established on his farm outside of Nashville. The farm didn’t only inspire new songs, it also recently served as the location for the “Just Fishin’” music video, starring youngest daughter, Trinity Adkins.

Lead single, “Just Fishin’” (Casey Beathard, Monty Criswell, Ed Hill) was produced by Michael Knox and is a father’s tender tribute to his daughter. Adkins’ signature subject range is present once again on PROUD TO BE HERE, whether he’s cursing his brother Clay for moving in on his lady on “Damn You Bubba,” or celebrating the simple pleasures in life with “Days Like This.” Meanwhile, the album’s title track, “Proud To Be Here,” (Chris Wallin, Aaron Barker, Ira Dean) reads like a page out of Trace’s 2007 autobiography and will strike a chord with everyone who can look back gratefully on the grace that guided them through narrow escapes.

Narrow escapes have famously been Trace’s luck in life – his most recent being the house fire that claimed his Tennessee home on June 4. After reassuring fans that he and his family were safe, the Country star redirected offers of support he received to those hit by recent floods and tornadoes in the South, asking instead that support be sent to the American Red Cross.

ABOUT TRACE ADKINS: Trace Adkins is one of Country music's most versatile and accomplished entertainers. His instantly recognizable baritone has earned 30 charted singles and 15 Top Ten hits gold, platinum, and multi-platinum albums with total sales surpassing 10 million. He is a sought-after television personality, an accomplished actor, a world-class voiceover narrator and commercial spokesman and successful author.

Literally an entertainment mega-star (he's 6' 6"), Adkin's stint on The Celebrity Apprentice earned him recognition beyond Country music and his recent supporting role in The Lincoln Lawyer (Lionsgate) has carried that even further.

A member of the Grand Ole Opry, Adkins was raised on Country and Gospel and is known as a traditionalist who speaks his mind and honors the past. Hits such as "Every Light In The House Is On," "This Ain't No Thinkin' Thing," and "You're Gonna Miss This," feature the heart-felt sentiment that Country music is known for. However, as his fans know, his range also extends to the rowdy side. Having played his fair share of honky tonks on his way up, it was obvious from the start that the rowdy barroom anthem, "Honky Tonk Badonkadonk," would become an across-the-board phenomenon, while his "All I Ask For Anymore," is a moving modern masterpiece that earned Grammy nominations for Best Male Country Performance and Best Country Song. (sdumusic. com)