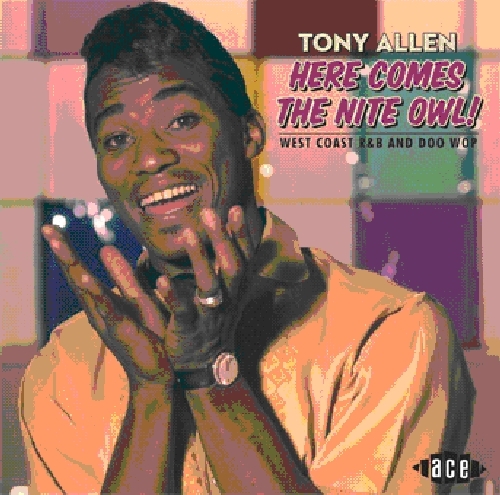 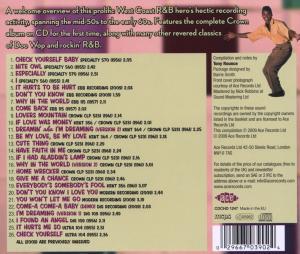 New Orleans-born, Los Angeles raised Anthony Penia Allan cut one of the all time great 45s of doo-wop, ‘Nite Owl’, at his first important recording session. It was immediately huge in his adopted hometown, and was just about to break nationally when Allen decided to move from Specialty, for whom it was recorded – to another label. Despite having a potential hit on its hands Specialty withdrew its support for ‘Nite Owl’ and for its budding superstar. The record didn’t chart and Tony Allen’s career never really ignited thereafter.

Always hungry for a hit, Allen hopped from label to label throughout the second half of the 1950s, recording for just about all of the most important imprints in and around the Los Angeles area in his quest for instant success. His reluctance to stay contracted to any given label, if things were not working out as quickly as he wanted them to, certainly didn’t work in his favour from a career-building standpoint. But the records Allen cut between 1954 and 1962 showed that he definitely had the talent to become a big star, even if his abundant desire for that to happen overnight often resulted in rapid contract termination.

Tony Allen recorded for around a dozen labels in a little less than seven years. Ace’s “Here Comes The Nite Owl” – named for his career song – gathers together all of his surviving work for just four of them, namely Dig / Ultra, Ebb, Kent / Modern and the aforementioned Specialty. Several rare singles are included along with the Crown album “Rock And Roll With Tony Allen And The Night Owls”. Individually and collectively, the tracks give a picture of a highly talented vocalist who could cut it just as cleanly on up-tempo rockers as he could on lugubrious doo wop ballads. There’s plenty of both types of material on show here, and all tracks are presented from the original master tapes.

Of course, Tony was by no means the only kid on his particular block who could do this, but one can’t help feeling that, had he allowed only one label to develop his career rather than move from company to company on what must often have been little more than a whim, he might be regarded with the same sort of worldwide admiration as his peers Jesse Belvin and Richard Berry, rather than just as the man who gave the rock ‘n’ roll world ‘Nite Owl’ and a few other goodies.

The bootleggers already made hay, down the years, with a hefty chunk of Allen’s catalogue. However, more than two-thirds of the sides featured on this, the first ever 100% legit Tony Allen CD, here have never been digitised before, and several have never been issued at all. It’s been a long time coming, but those who continue to write and e-mail us for more vintage rhythm & blues releases will surely be glad that the ‘Nite Owl’ is finally making a well-deserved appearance in the Ace catalogue.