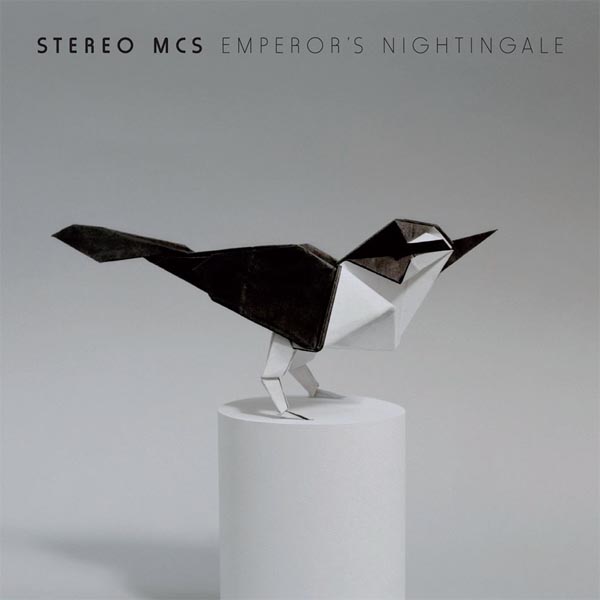 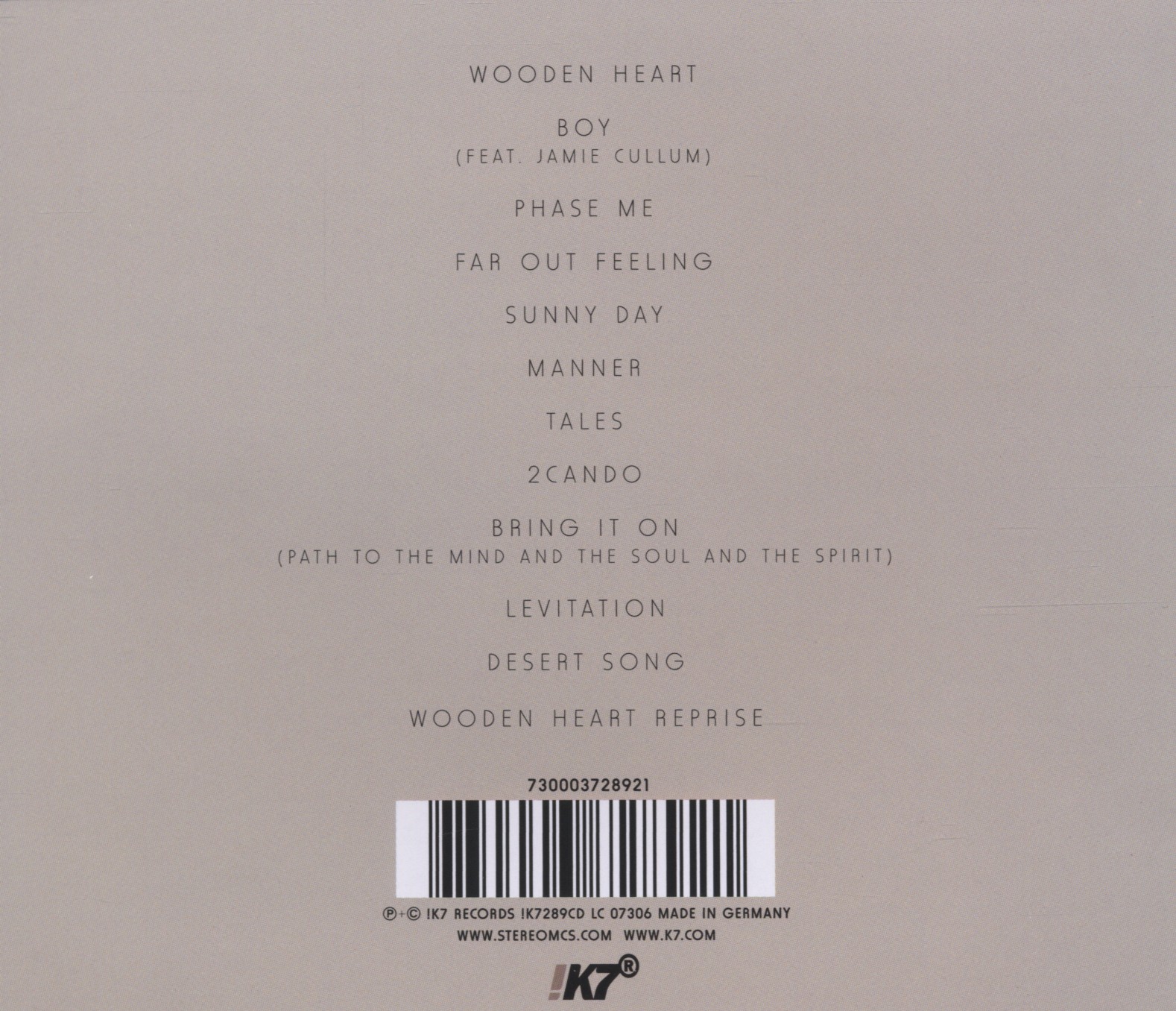 “There’s a point, when you’re in a certain headspace, where you feel you can actually do anything we want to do, and not really have any preconception about it,” says Nick Hallam. And for him and his long-time Stereo MCs partner, Rob Birch, their journey into sound has been constantly defined by the battles they’ve had to fight for creative freedom – not with record companies or industry figures, but from the pressures they put themselves under. To many pop fans, the Stereos are the group who burned bright in the early ’90s, when their third LP, Connected, won two Brit Awards and shifted millions of copies, and who then disappeared for the next decade. But as their new album, The Emperor’s Nightingale, suggests, the true story is much more complicated – and far more fascinating – than that.

Friends from Nottinghamshire who moved to London and discovered hip hop’s liberating potential during rap’s mid-to-late-’80s ‘golden age’, Hallam and Birch became Britain’s first global rap stars, paving the way for the Plan Bs and Dizzee Rascals. The first rap group to play at British rock festivals, they managed to fit everywhere and nowhere at once: appearing live with everyone from U2 to the Happy Mondays, from Living Color and Peter Gabriel to Jane’s Addiction and De La Soul, the Stereos were exceptions to every rule – the rap band rock fans could dig, the dance act it was cool for indie fans to groove to, sought-after as remixers, producers or collaborators by everyone from the Jungle Brothers to Madonna.

The first Stereo MCs single, Move It, was built on a tiny Casio keyboard atop a drum beat sampled from a cover version of Stevie Wonder’s Superstition. With third member, DJ Cesare, Rob and Nick took to the live circuit – for their first club Pas, travelling across London on the capital’s night bus network. They cut their first LP, 33 45 78, for £15, 000; the record, released in 1989 on the band’s own Gee Street label with the backing of Island, helped establish the name, even if nobody could quite manage to pigeonhole their hybrid of idiosyncratic raps, imaginative breakbeats and ferociously soulful melody. Sales weren’t huge, but the promise was sufficient for Island to fund a follow-up.

Supernatural was recorded in Hallam and Birch’s Lavender Hill flat, and finished in two weeks of overnight sessions – the studio was cheaper during the hours nobody else wanted to use it – at Calliope in New York, where De La Soul had made their classic 3 Feet High & Rising. Jairobi, of A Tribe Called Quest, would drop in and go to sleep under the mixing desk when he couldn’t get a cab to take him back home to Queens; Afrika Baby Bam of the Jungle Brothers contributed to the record; the Stereos became honorary members of De La and Tribe’s storied Native Tongues rap family.

By now the group had expanded again, drummer Owen Rossiter (stage name: Owen If) recruited to bolster the sound at the gigs with alternative rock bands the Stereos were now booking, and vocalist Cath Coffey was drafted in to add a gospel tinge to their soul and pop aspects. The 1990 album, again, wasn’t a huge seller, but the Elevate My Mind single was a Top 20 hit in the US: the band played gigs in Los Angeles and were astonished to find that they had a huge Latino following, thanks to the song being championed by Spanish-language radio stations on the west coast. Still, what followed was unexpected. The 1992 release, Connected, had initially confounded the label – “I remember going into the promotions department and the guy was going, ‘Yeah, I like it, but I’m not really sure what I should do with it’,” Nick recalls – but the Stereos’ perennial problem turned out to be their greatest strength. Nobody knew what to call their mix of groove, soul, melody and inspirational raps, but that meant that no one group of listeners could claim it as exclusively their own. The album – and its title track, which became the first single – were embraced across the board. The single gave them their first Top 20 hit; the album spent almost a year on the UK album chart, peaking at Number 2, and won two Brit Awards in 1994. The Stereos had become one of the biggest bands in Britain. “It was like, there’s this road here which is really congested,” explains Rob. “And there’s this other road, which we’re on, where you’ve got a total vision of what you wanna do, and no-one else is taking that road. That’s what it felt like. No-one else was going down this road – we’d got it all to ourselves, pretty much. And it was the greatest thing in the world – until we made Connected – and then people were starting to catch on to what you could do if you just didn’t follow the book of rules.”

The group’s willingness to tour with anyone whose fans they thought they could win over had paid off, and took them up a level. They found themselves on stage in football stadiums, supporting U2 (whose single Mysterious Ways Nick and Rob had remixed). At one point they played Golden Gate Park in San Francisco, as part of a WOMAD tour with Lenny Kravitz and Peter Gabriel, to a crowd of over a quarter of a million people. But even in the midst of spectacular success, something wasn’t quite right.

“In the same way we were never in any particular genre of music, we were never really a typical successful group,” says Rob. “We didn’t have all that shit that you usually associate with a successful band. So when you’d finished a gig, you usually found yourself oddly lonely. I’d usually find myself walking around the street on my own – that’s all I remember from it all. Even when we were getting Brit Awards I was still in outer space somewhere – couldn’t see it all. ‘Cos when you come to play and perform, you’re this little animal, and the only friend you’ve got is your music. That’s how big you are: it’s just you and your music. And that’s a nice thing, really. That’s the beauty of it.”

Two years of almost constant touring off the back of Connected – which itself followed straight on from the years of constant road work that had interspersed the making of the three albums – took its toll on their creativity. A form of writers’ block struck them down: at the moment where they were expected to consolidate their success and make the next step towards the elite status of multi-platinum sales, limos at the airport and global superstardom, the Stereos hit a wall.

“Because we were away so much I think that was the problem,” says Nick. “You feel that you’ve lost contact with things. I’m sure I’ve said this a million times: it was kind of suicide commercially, to a degree, that we didn’t put another record out then.”

“When you’ve made a record and you know where it came from, you sort of know that there’s only one of that record,” reasons Rob. “Music was changing: we’d been away, and music on the radio was no longer the same when we got home. You know that that stage of the journey has ended, and you want to hold on to what you are – but you’ve got to change. And it’s a difficult thing to do.”

Their indecision and a self-confessed propensity for “moody” behaviour translated into some curious decisions. The pair turned down offers to remix Massive Attack and David Bowie; Robbie Williams, a huge fan who knows by heart Rob’s entire lyric to 1988 single On 33, asked them to help produce his solo debut, but Birch and Hallam declined. They busied themselves in other projects, their Natural Response label releasing tracks by master British rap artists such as Hijack and MC Mell ‘O’, and the publishing company they set up, Spirit Songs, helped bring artists like Finley Quaye and Jurassic 5 to worldwide attention. Their first new material since Connected surfaced in 1999, on a DJ mix album (DJ Kicks on K7); the bona fide follow-up, Deep Down & Dirty, arrived in 2001. After ditching the half-formed ideas they’d been struggling with for years, the record came together in the pair’s new studio space, on the notorious “Front Line” in Brixton, in the district of south London the Stereos had long called home. A suitably raw, earthy funk and a spacey, dub sensibility informed the record’s grooves: it made the UK album chart Top 20, and to some fans it remains the band’s best work. But, as a wry graphic in Q magazine pointed out, the album’s gestation was longer than World War Two: the weight of expectation that had built up over all those years, and the inevitable truth that it would not out-sell Connected, meant it would always feel like an underwhelming comeback. The band toured, and tried to play the old game a bit, but everything had changed: music, the record industry, themselves.

As the 21st century drew on, the Stereos parted company with Island, and began the third act of their creative lives. In 2005 they re-emerged with the album Paradise, released on their own Graffiti label, and followed it up a mere three years later with the more electronic Double Bubble. Both records were strong enough in themselves, but from today’s vantage point they appear to be stops on a much longer journey rather than destinations in and of themselves.

“Paradise was, in some ways, a self-examination on record,” says Rob. “An examination of our past and what we were going through, and Double Bubble was more like, ‘Right – I think we’re part of the present world again, we’ve got an inkling of what’s going on and how we’re gonna ride it.’ They were definitely plots on the course to more important things.”

And, with The Emperor’s Nightingale, we finally get to hear what those “more important things” were. At last feeling free from Connected’s status as both musical milestone and creative millstone, Hallam and Birch are doing what they’d wanted all along – allowing hip hop’s liberating philosophy to help them make music that obeys no rules but their own. They’ve reached out beyond their core group of long-term friends and on-stage collaborators, and, for the first time, have written with other artists: Bruce Woolley (best known for his work in the ’70s and ’80s with Trevor Horn – he co-wrote Video Killed the Radio Star and Slave to the Rhythm), Nathan Drake and Greg Fleming (who go by the name Deekline and Wizard for their breaks work, or The London Punks in their live incarnation).

Freed from the pressure to rap simply because it’s expected, Rob sings on the record, much of which was written not how the Stereos have usually worked, by building up grooves from sampled loops and beats, but from old-school jam sessions, with bass, guitar, drums and vocals all playing together until they find a common thread. It’s a sound that will surprise those who think they know what the Stereos are all about because they’ve heard Connected used in ads for mobile phones for most of the nearly 20 years it’s been around, or who nostalgically remember Elevate My Mind and think they know what these guys are capable of. But to long-term fans who’ve grown up with Rob and Nick, and shared some of their adventures through sound, the record will feel like the next logical step forward for a band who’ve only ever been about making music that’s true to hip hop’s sense of limitless creativity and do-what-feels-right spirit.

“We’ve really had to re-learn how to make music,” Rob admits. “But when you actually start to see some progress, and hear yourself making some sounds that you’ve never made before, your enthusiasm really starts to generate again. And then you get a grip on it, and you start to see what you can do. It’s like we’re not really in the dark any more.”(stereomcs. com)